I was thrilled my longtime pal Steven Adler was returning to Sin City! It had been awhile since I saw Steven and I heard he had a new

line-up with his band and I couldn’t wait!
I got downtown before the show and had trouble getting in touch with Steven on his phone and since the band members were new, it was a challenge. Lucky for me Alice Goldstein put me in touch with new rhythm guitarist A.J. (Alistair James) who came out and got me and took me back to see Steven. Steven hugged me for a long time and it was a great reunion. Steven lived in Las Vegas years ago and some of the best times of my life during 2006-2007 were with Steven.

Steven gave me an entertaining tour of the Frank Sinatra dressing room as I filmed and interviewed him and met the rest of the new band members.

Once Steven and the band hit the stage loyal fans stood and sang the GUNS N’ ROSES songs at the top of their lungs. Including me! I was dancing like a nut and applauding

wildly and was so happy for my great friend. And the new band rocked! Tanya OCallaghan held down with the steady bass back-up, Michael Thomas’ lead guitar screamed with the classic GNR riffs, A. J. was on rhythm guitar in true rock star form and Ari Kamin sang Axl Rose better than Axl! And of course Steven made many entertaining speeches during the show pointing out his mother who was there that night and thanked everyone in the band, on staff at the Golden Nugget and of course the fans who loved him right back.  Backstage I was spoke to Tanya OCallaghan and told her that she was amazing onstage and it turned out she had just finished touring with Dee Snider. I also met the Entertainment Manager for the Golden Nugget, Dave Gillie who was very entertaining himself, and was a true fan of so many of the musicians who had performed at his venue.

Steven and I had a chance to catch up on things and he told me his favorite photo of him was the one I took in his bedroom of him vacuuming that I published in Vegas Rocks! Magazine in 2006.  I always get upset when people don’t recognize Steven for being the original drummer and a part of the rock band  that had the biggest selling album of all time (Appetite For Destruction/Guns N’Roses) and he is indeed a legend in the world of rock and roll. Congratulations on the great new band line-up Steven!  Come back to Sin City soon- we love you!         -Sally Steele       Photos: Sally Steele 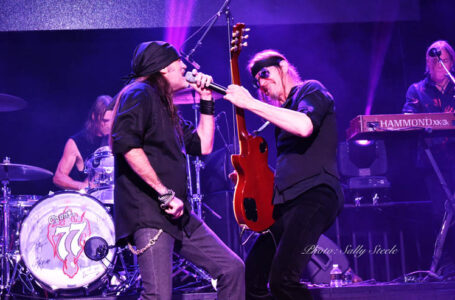