The best Halloween party in Sin City rocked Planet Hollywood on the night of Ghouls! MBarth personally invited me to the event and when Mario is in charge you KNOW you know that you are in for an epic event! The event was the official grand opening party for the Coalition for Tattoo Safety’s Las Vegas Tattoo Show and Convention.

When I arrived near the Gallery Nightclub, The lobby was already filled with decorated costumers and a flurry of people gearing up for a rockin’ party inside the club.

ding Sabina Kelley, Mickey Avalon, Corey Harrison from Pawn Stars, DJ Aero, Tommy Lee and so many more!  I went over to say hello to Mickey Avalon and he immediately recognized me from our interview a few years back.

Mario Barth gave me two VIP silver glitter armbands as I entered the club and I was set! Clowns, scary monsters and ghouls were placed throughout the club and greeted the guests as they entered the dark venue. I heard Tommy Lee was there so I headed into the VIP area but I couldn’t see him anywhere. But then I noticed someone in a lit up black workout suit with a black mask with a long black nose covered from head to toe. No one was really paying much attention to the person in the booth with two other people but I looked on the only exposed part of his body and recognized the tattoos as Tommy Lee’s. With me being a life-long Motley Crue fanatic, T-Bone couldn’t hide from me! I approached him and asked for a photo playing like I didn’t know who he was and he started dancing wildly and moving with signature moves as only the bad boy drummer could do.

Soon my fav’s BUCKCHERRY took to the stage with frontman Josh Todd leading the crowd in Buckcherry’s best tunes. I don’t know what is better: hearing my favorite Buckcherry songs live or watching Josh Todd lose more and more clothing showing off his tattoos as the show goes on…. Probably the latter! Dj Ashba and his wife Naty and my friend Alice Goldstein arrived later in the night so we all hung around in one of the booths.  Corey Harrison was nearby and later in the night, I saw him motioning to me to come over to him. He had a bit to drink and he told me: “You are Vegas Rocks!… I’m sorry I blew you off.” I was unsure of when he was referring

to but I told him no worries.  Corey and his dad Rick came to my first Vegas Rocks! Magazine Music Awards in 2010 and it’s always cool running into the cast of the most famous pawn shop in the world around Las Vegas. Corey Taylor from Slipknot was also in the mix and added to this being the most killer party on the Strip that night.

Thank you Mario Barth for inviting me to this amazing event! Don’t forget to invite me next year!

Special thanks to Derek Wallace and Christopher Engel for helping me take photos and film on the Red Carpet!

BILLY GIBBONS DOES THE BLUES AT BROOKLYN BOWL! 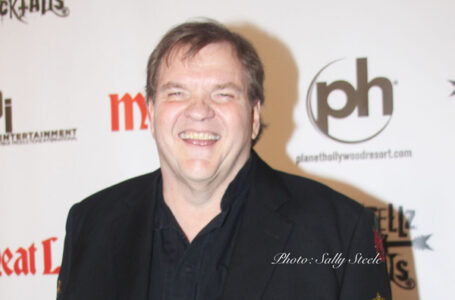