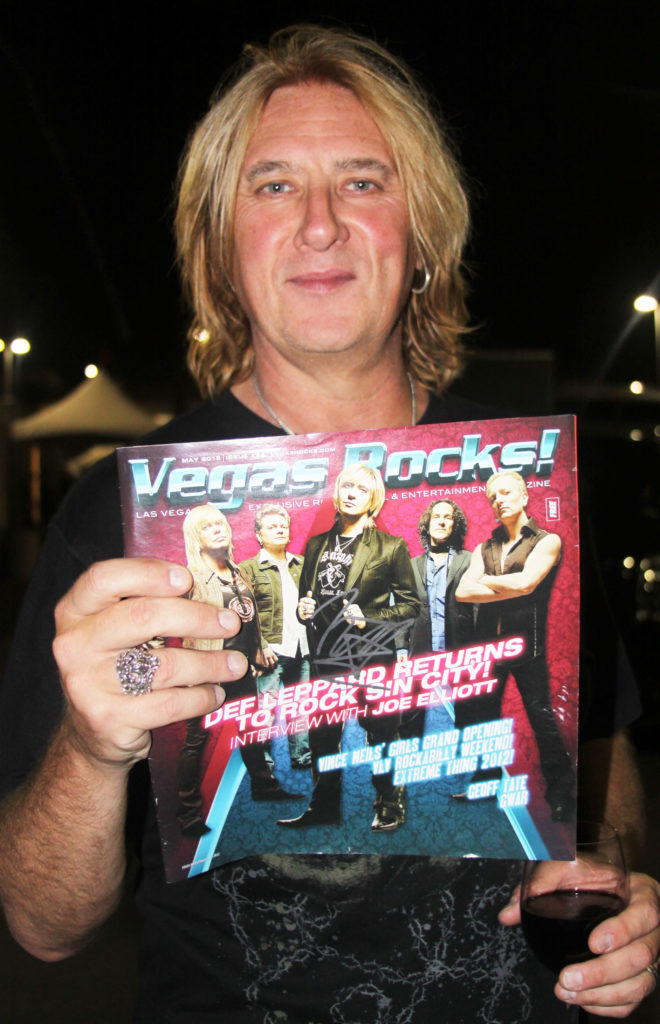 VR: “Great. Thanks so much, I know you’re busy. I guess you’re way over in Argentina today huh?”
JOE ELLIOTT: “We’re on the Rock N Roll All-Stars Tour, let me start at the top, in no particular order; Ed Roland from Collective Soul, Steve Stevens from Billy Idols band, Matt Sorum, Gilby Clarke, Duff from GNR, Sebastian Bach, Gene Simmons, myself, Mike Inez and Glen Hughes. We’re just in and out of each other’s songs all night long.
VR: “Oh that’s great. Those are some of my good friends over there. Steve Stevens and Sebastian Back, we honored them, they came to my Vegas Rocks! Awards last year. Please tell them Sally said hello.”
JOE ELLIOTT: “I certainly will.”
VR: “I want to get a few questions out. I’ve been wanting to interview you for a long time. I guess we’ll start from the top. So, you’re touring now, you’ll be here in Vegas with Lita Ford and Poison, you’re really popular. How’s all that going?”
JOE ELLIOTT: “We kind of made a game plan, five or six years ago to re-evaluate our position in the music industry if you like, just taking on board, quite sensibly I think, everything that’s going on in the world regarding the technology, the way the music industry has changed for the good of the band. It just became more and more obvious that live was becoming the more dominant part of what bands do these days. The days of yore, whether it be the Beatles, The Stone, Led Zeppelin or Elton John etc they went on tour to promote an album, and pretty much these days, you might promote an album to promote a tour. Just so you can keep that idea in your mind that writing new music is really important to somebody. It appears less and less these days that it is; which is really sad because musicians like ourselves have heads full of ideas and it seems less important that we do and that’s really frustrating. At least it’s counteracted by the fact that people still want to see us live. 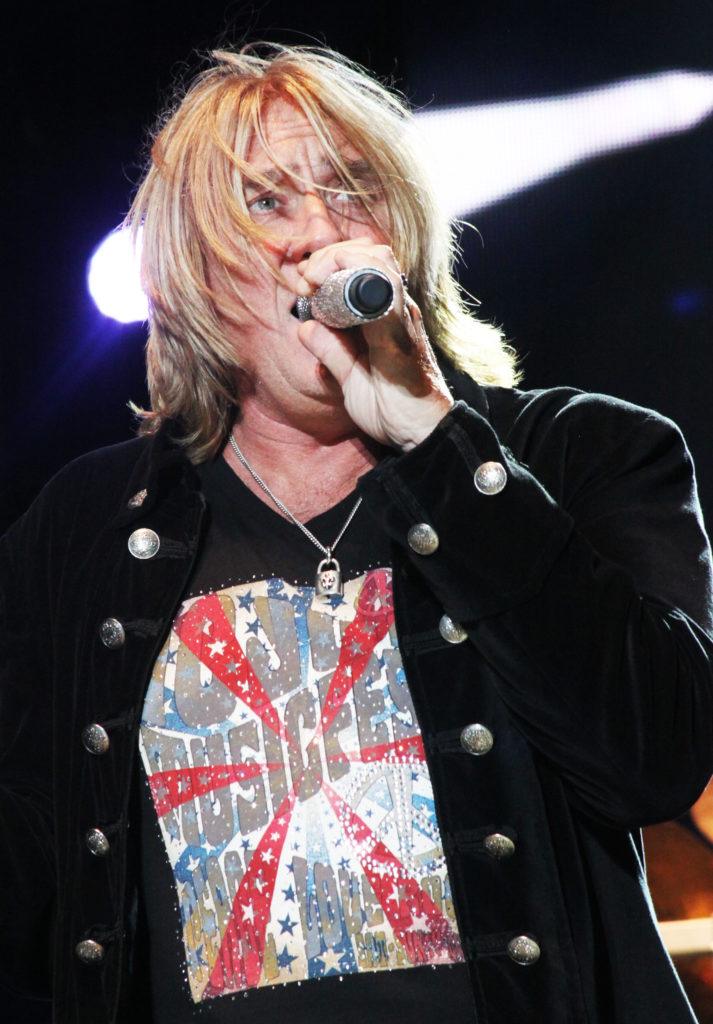 VR: “Do you have any plans as far as recording new material?”
JOE ELLIOTT: “I’m constantly writing but I’m not always writing for Def Leppard. Sometimes I write a song and think it’s just not appropriate but it’s a great song. I’ve been working on and off for the last six or seven months with a very good friend of mine, a Canadian songstress called Andrina, we were thinking about an EP but it’s going to be an album because we keep coming up with more songs all the time. Just the two of us doing that; kind of a Plant/Krauss thing but it’s more hunky-dory than blues; Bowie-esq type stuff you know. It doesn’t really fit the Leppard kind of plan. You know if you have a song in your head, it doesn’t have to be abandoned just because it doesn’t sound like something off of Hysteria. I’m constantly writing and just looking for alternative ways to get them out. When Leppard gets into the recording an album mode then everything that your write is in that style, you just get into a room with the other guys and we bash them out as a team and pick the most appropriate stuff and that’s the ways it’s always going to be I think. And when you get things that don’t fit the Leppard thing you hope you have alternative outlets, like Phil has his Manraze project and I’ve got my Down N’ Outz which sooner or later will feature written material, Vivian himself not so much but Rick’s got his artwork, so everybody’s trying to find some sort of artistic satisfaction in the now opposed to trying to imitate the old which for someone who’s been doing this for 30 years is destined to end up.
VR: “Well you certainly made your mark with the history of the band in the past 30 years. We’re just happy that you’re out there doing that.”