I was excited to sit down with Sammy Hagar when he came to town last month with CHICKENFOOT and catch up with all the Red Rocker was up to.This was my second interview with Sammy. We are so excited to be honoring Sammy with “The Voice Of Rock” award at the Vegas Rocks! Magazine Awards August 26th and it looks like Sammy can’t wait! Sammy is such a great guy and seemed as happy as ever in his life. Before I had this interview with Sammy, I picked up a copy of his book “Red”. I thought I had known everything about Sammy but this book really clarified so much more. It is one of the best books I have ever read. So I was ready about many of the topics Sammy covered in the book from UFO’s, fortune tellers and of course, VAN HALEN…

SAMMY HAGAR: “I’m doing good Sally. I’m happy to be here in Las Vegas at my own place, the Cabo Wabo. Did a great show last night with Chicken Foot and I’m happy, I’m having a good time.”

VR: “Yes, I saw you last night. I watched you, what an amazing band. You have to see this band live, it really is amazing.”

SAMMY HAGAR: “Yeah, CHICKENFOOT is really all about the live show. You have Joe Satriani, Kenny Aronoff on drums because Chad is with the CHILI PEPPERS, Michael Anthony and myself. We are all so seasoned at jamming and having a good time. I learned to jam when I was a kid but when I built the Cabo Wabo in Cabo, I’ve jammed 25 to 30 shows a year with anybody, from Kenny Chesney to Slash to Rob Zombie I mean  anyone, Mickey Hart and the Grateful Dead Guys. I jam with anybody, so with this band; we take an hour’s worth of music and stretch it into two hours every night.  It’s kind of an event because every time you play a song, it’s never exactly the same and I love that.”

VR: “I heard you talking last night about when you were first starting out, you couldn’t wait to get home and play your guitar. Now if you hadn’t made it in music what else did you want to do?”

SAMMY HAGAR: “My father wanted me to be a boxer because he was a fighter. I’m 64 years old right now, I wouldn’t be fighting [laughs]. This is such a great profession because I can still play music like John Lee Hooker, BB King, the blues guys, the jazz guys, they play until they die. So yeah I’m really happy that it happened for me.”

VR: “Did you think that you were going to make it?” 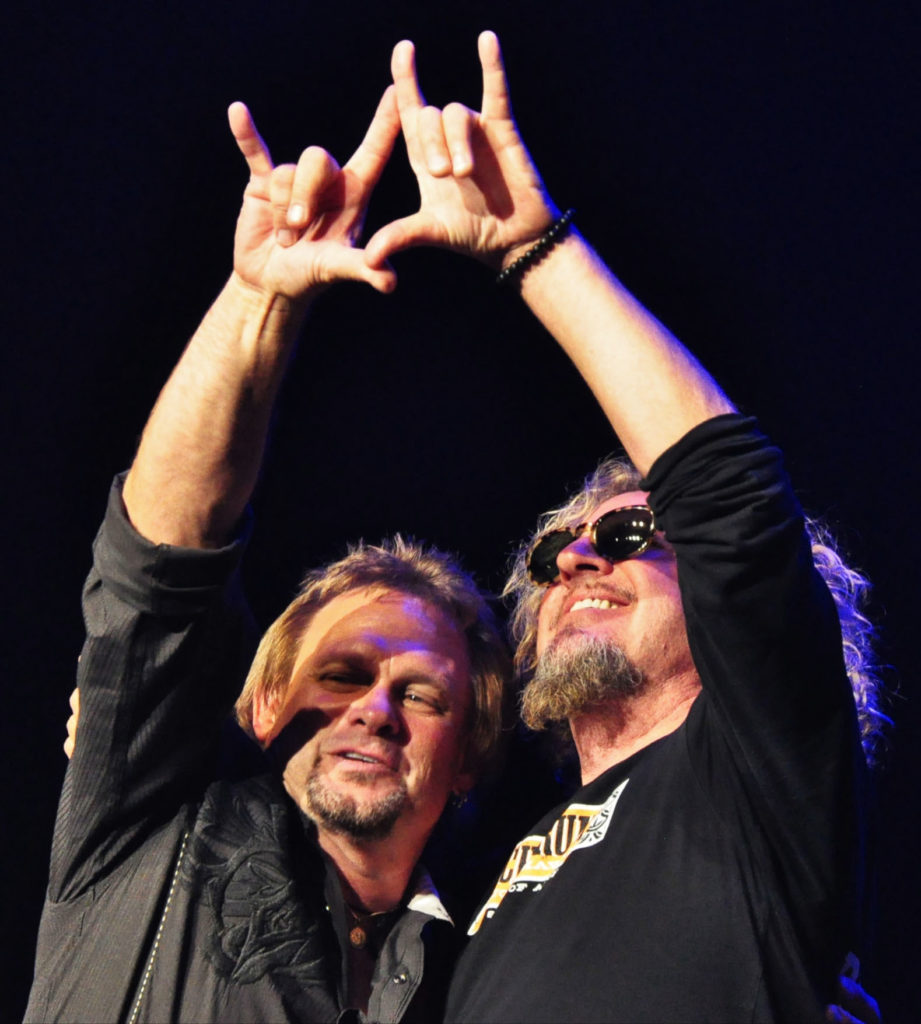 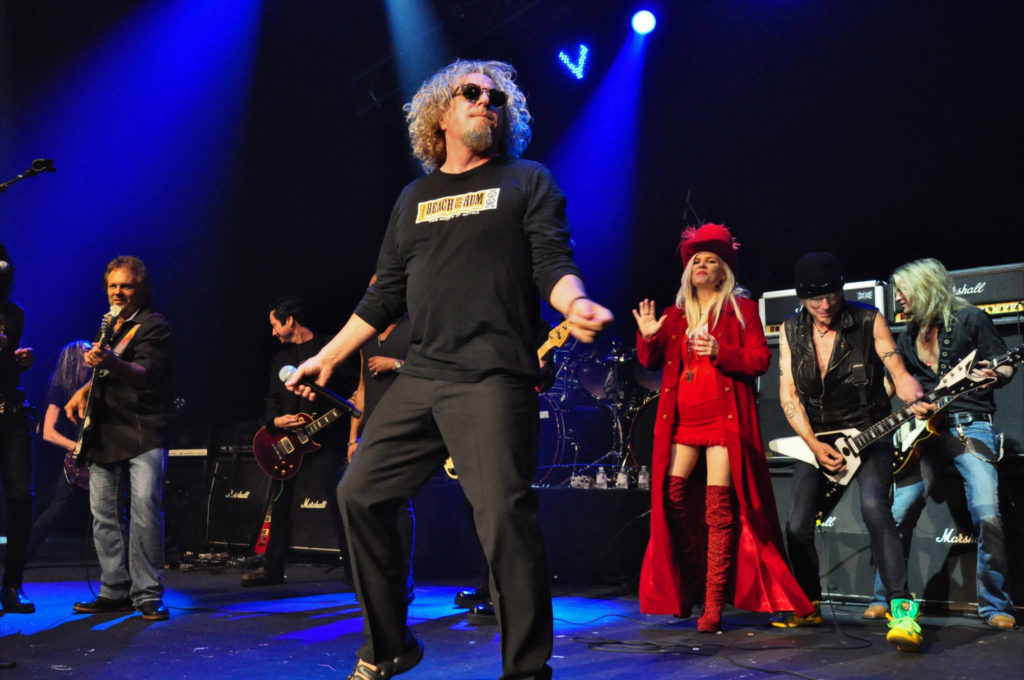 SAMMY HAGAR: “Yeah I did, I gotta say that. If you read my book, you know I’ve always had a real positive attitude. You know my mom, sister, brothers, my teachers, my principals, my bosses always said I had my head in the clouds, ‘you better wake up and get a real job’. You know I heard that my whole life, so if I really didn’t think I was going to make it I probably would have folded… but I didn’t fold.” 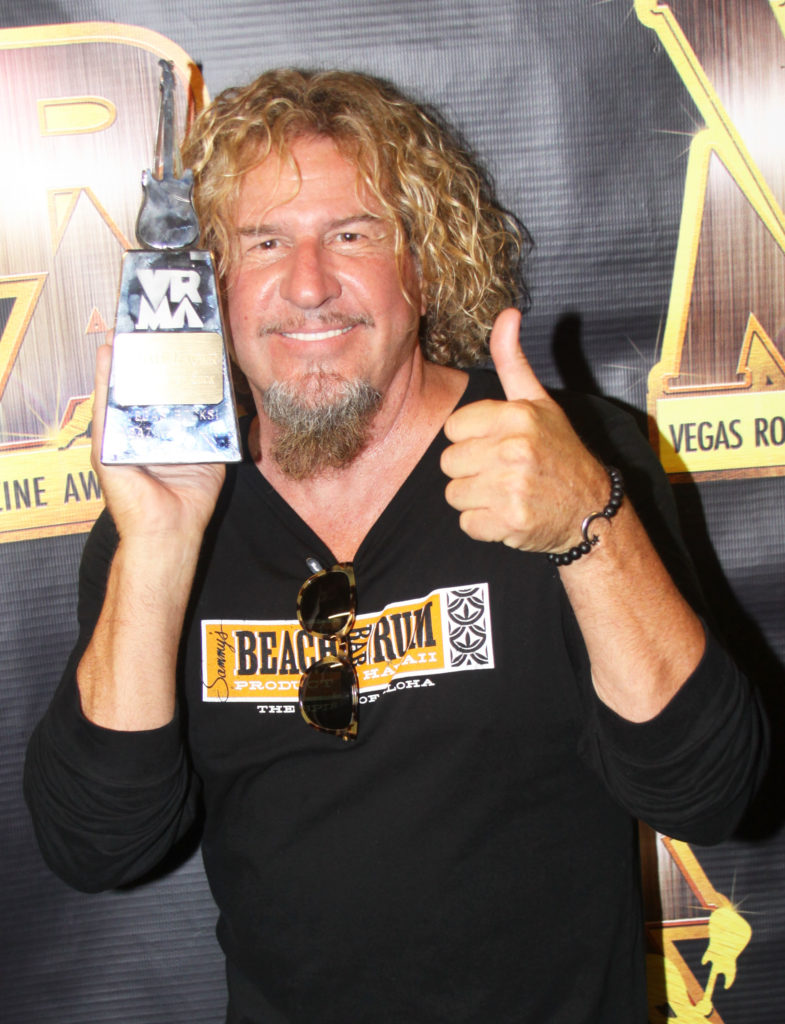 VR: “I also read in your book that somebody stole a guitar for you because he was so sure you were going to be a rock star, you didn’t mention his name – did you ever talk to that guy again?”

SAMMY: “Unfortunately that guy is in jail, in fact I’m not even sure he’s still alive. At that time around 14 or 15 years old, I was hanging around some bad guys. We were sneaking around stealing cars, not to sell but just to go joy riding in them. We’d get high and go into liquor stores. The ages between 16 and 18, I could have gotten in some serious trouble but I didn’t.  All those guys are gone; either dead, in prison or just losers. If I saw them, I’d be nice to them and take care of them but they just went in a whole different way. Some of those guys probably don’t even know that I made it [laughs]. It’s really true, they would probably see me and think: ‘Didn’t we used to hang around some guy like that named Sammy?’[laughs]. 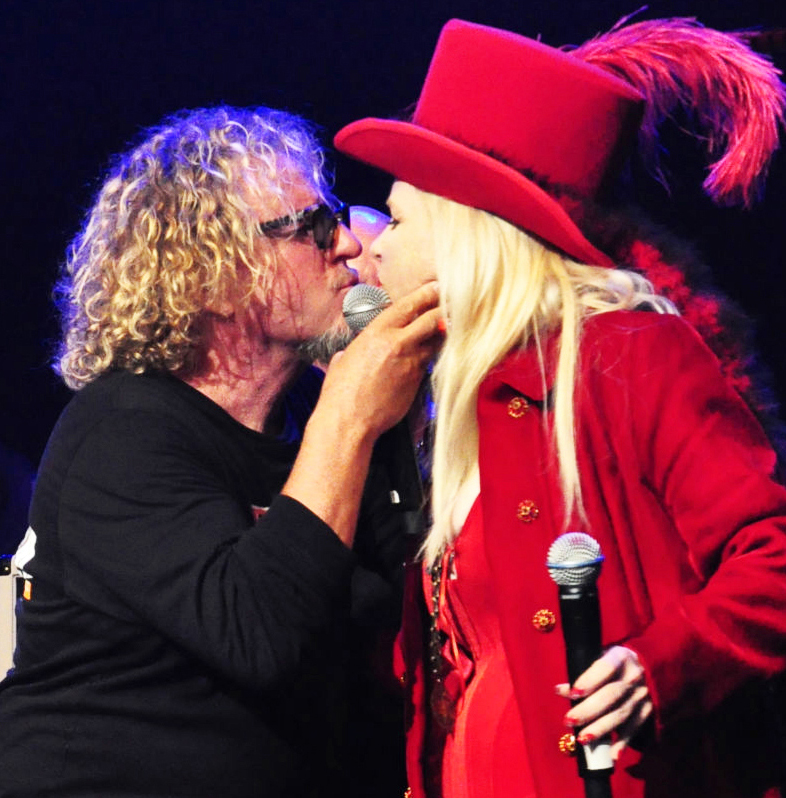 VR: “Now of course Mrs. Kellerman (a fortune teller) told you that you were going to be famous, did you believe her?”

SAMMY: “I did and I believe in positive input, she gave me positive input.  It’s like if you have a little kid and you tell him he’s good or the picture he drew was good, what’s he gonna do, he’s going to go back and draw another picture and he’ll get better at drawing.  So praise and people giving you confidence to do what you do is the most powerful tool anyone can give their children.  I wasn’t a child but I was young but she told me I was going to be rich and famous, your name is going to be in lights blah blah blah and I thought alright, the first person ever to say that to me rather than oh you’re stupid, you’re dreamin’ kid, never going to make it, cut your hair. I was a hippie, man, I was getting thrown out of dives and places I wouldn’t even go today [Laughs]. “

VR:“But she also told you to shave off your beard.”

VR: “Did she ever see you make it big like you did?”

Sammy: “Unfortunately, I heard she passed away…but she saw it BACK then. She saw the lights, the crowds and everything before anyone else.” 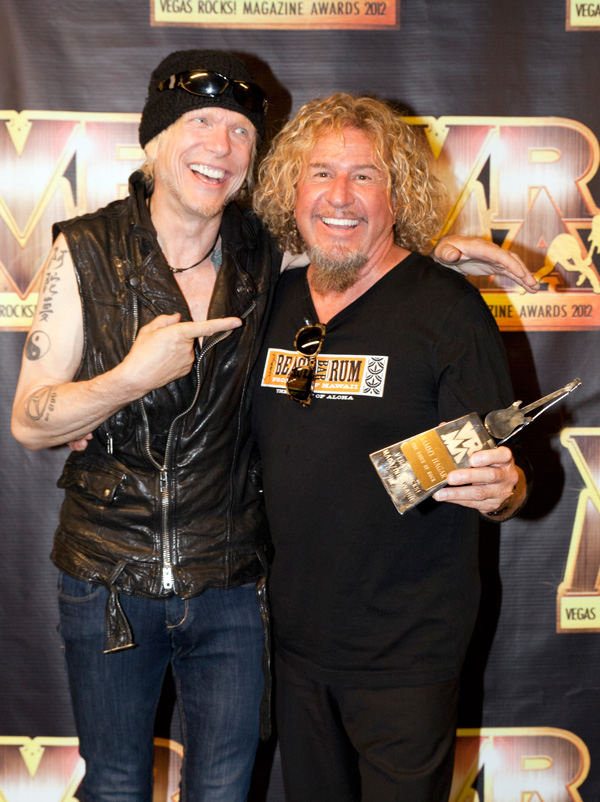 VR: “I respect that because you really believe in that stuff, you also talked about the UFO, was that like a dream, I don’t understand that.”

SAMMY: “I don’t understand it either, it’s so foreign and that’s why people don’t understand.  I don’t understand it, it felt like a dream but it wasn’t because I woke up and I was where I was.  So I went ‘hmm..’ and there was a split second or a couple seconds where my eyes were open, I was where I was but I was still having the dream but I was awake while it was happening. And that’s what made it so It really sent me on a quest for knowledge, I wanted to know about outer space, I want to know about UFO’s, I want to know about aliens, before that I couldn’t care less. You could talk to me about that stuff and I’d say yeah go watch a movie.”

VR: “Has anything happened since with UFO’s?”

SAMMY: “A few things, cosmic things but nothing as profound as that.”

SAMMY: “I’m sure they have, they know how to tap me out now without me knowing. I think everybody, well not everybody but a lot of people go through that and they just don’t remember or they black it out in their brain, I just happened to remember.” 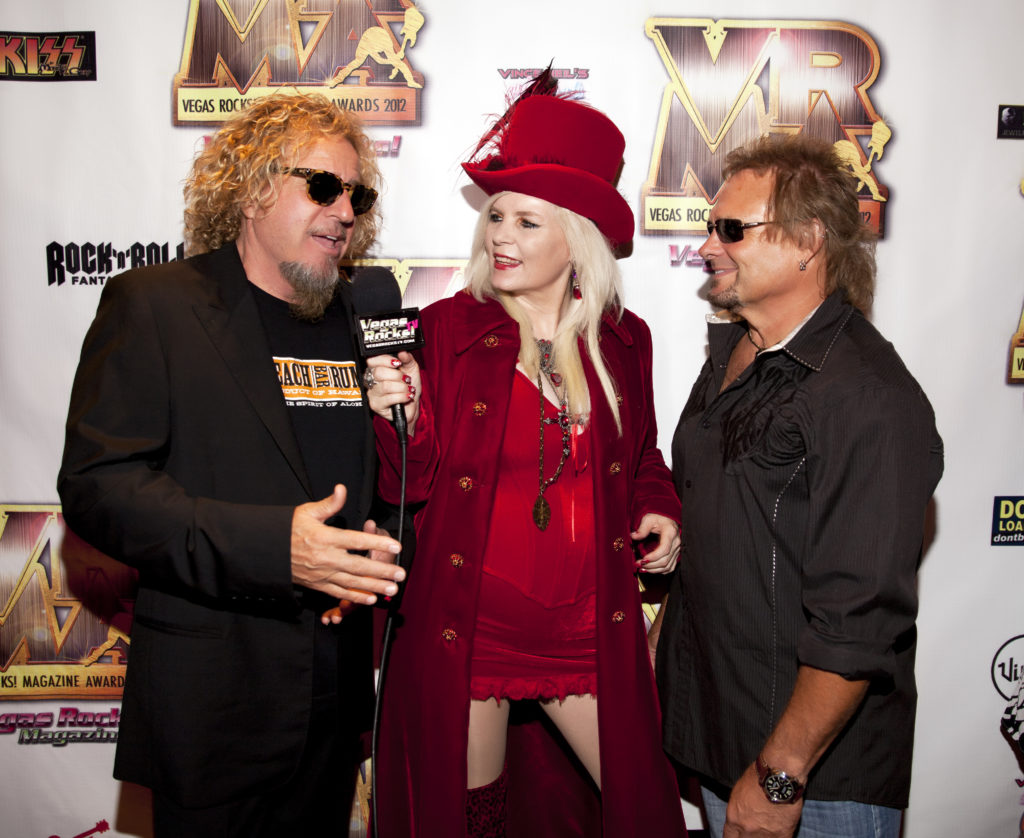 VR: “There’s this thing going on obviously with Van Halen and David and everything. Now someone told me that you really get along and that you just do it for publicity.”

SAMMY: “[Laughs]Ha ha oh really!, no we’re not that clever. I can get along with Alex, I got along with Eddie at one time amazingly, obviously Mikey and I are dearest friends on the planet but Ed man, we… you know, he turned on me. I don’t even want to get into it. It’s in the book, I said it there, it was a horrible, horrible ending to a beautiful, beautiful story. I’m still disappointed that they haven’t reached out to be friends, specially Alex;  because Alex and I didn’t have a problem. But he can side with his brother, which I understand, but I can’t like someone but I can like a friend of theirs. But it doesn’t really matter to me. CHICKENFOOT has just felt totally right from the day we did it and it feels so much like early VAN HALEN when I was in the band in the beginning. I gotta tell ya, Joe Satriani, Mike, Chad and Kenny, all of them, they satisfy all my musical needs I have. I’m not hungry for any reunion; I’m not hungry for any other band. I’m completely in love with CHICKENFOOT. So if it wasn’t for that, I’d probably be completely bummed about the VAN HALEN situation but it doesn’t bother me whatsoever.” 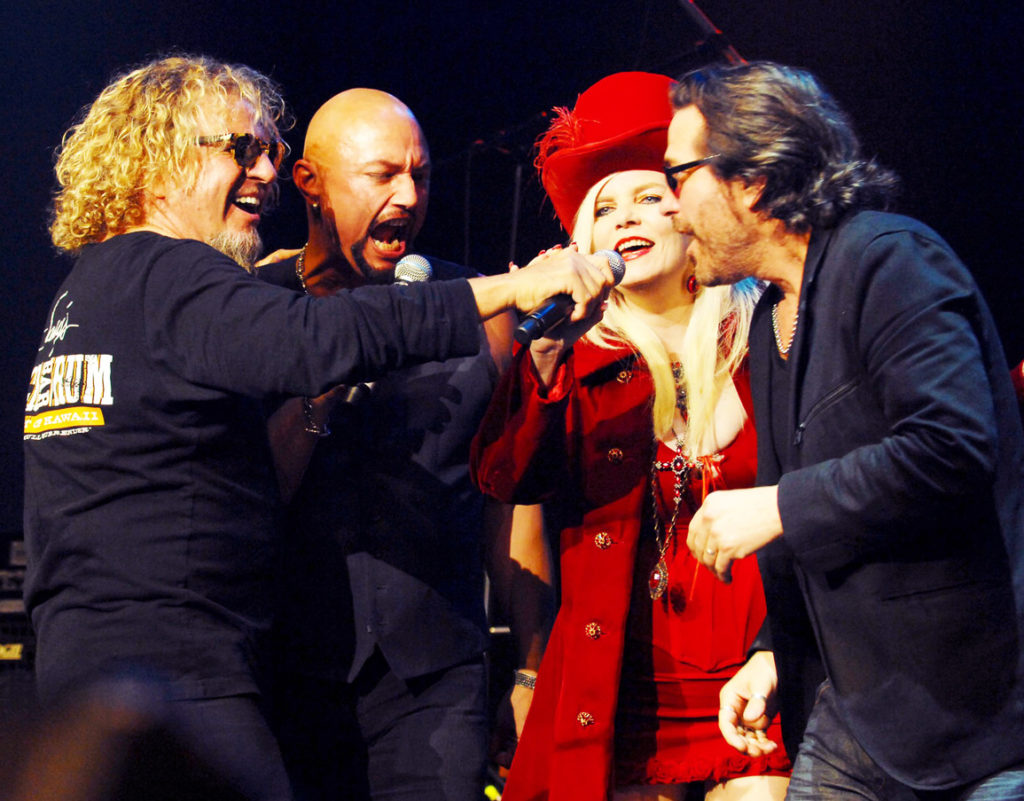 VR: “You don’t think you and Eddie will ever patch things up in the future?”

SAMMY: “I can’t see why we wouldn’t and I can’t see why we shouldn’t – but I don’t know, like I said I’m not out there, it’s not my goal. As far as I’m concerned he owes me an apology, if he wanted to be friends he should reach back out to me because what happened on that reunion tour in 2004 was some of the most miserable, backstabbing, dark crap I’ve ever been involved with in my life.  I’ll never go through that again for anybody, for any amount of money, fame or fortune, nothing, so until he comes around and says dude ‘I’m sorry, I was an a**hole, I was wrong’ and wanted to be friends again, I’ll be there in a second. For me to reach out would be stupid, he’d probably say ‘oh you wanna get back in the band, f*ck you buddy’ .Besides I’m not interested , plus I don’t want to be back in that band, I love CHICKENFOOT.” 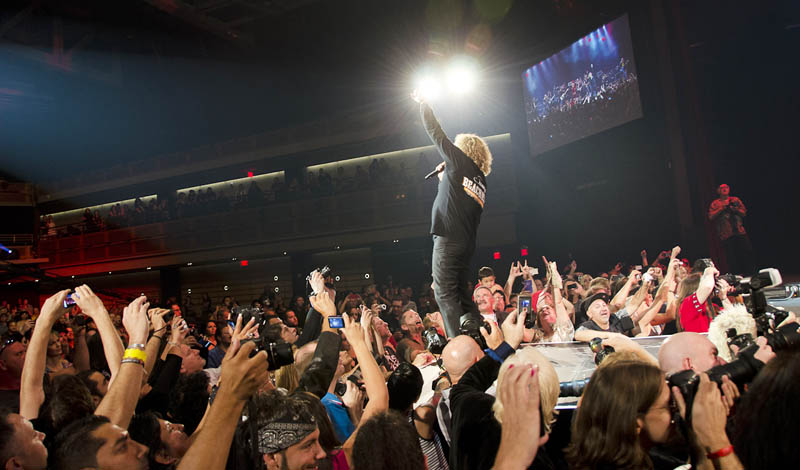 VR: “They were amazing; they were here a week ago when we saw them.”

SAMMY: “I love where I am right now, I couldn’t ask for anything more in life; fame, fortune, my children and my friends. Like I said last night, I’m the luckiest guy in rock that’s for sure, except Michael Anthony [laughs].”

VR: “We’re very proud of you Sammy and look forward to you coming to the Vegas Rocks! Magazine Awards.” 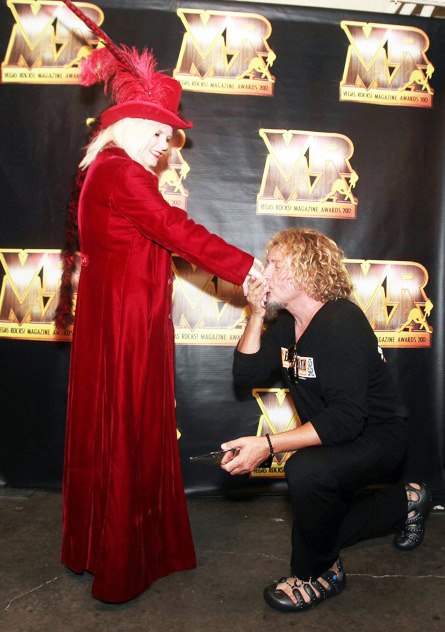 SEE THIS INTERVIEW WITH SAMMY AT VEGASROCKSTV.COM! 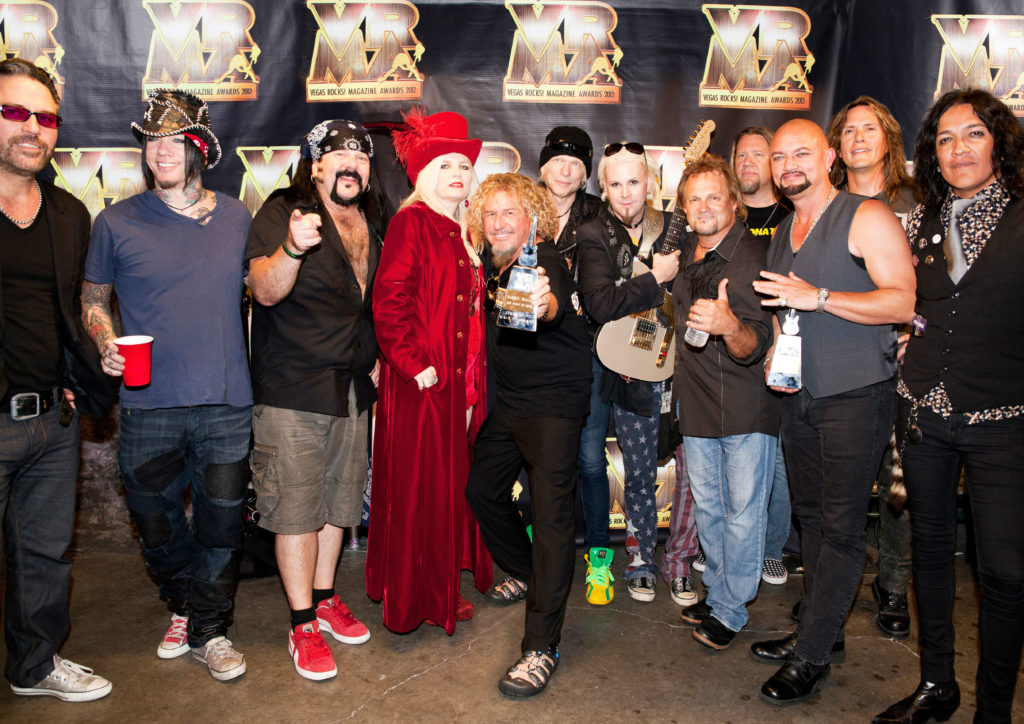