What an epic celebration! What a party! I have attended two of the historic Rainbow Bar &Grill in previous years but this one was off the hook! 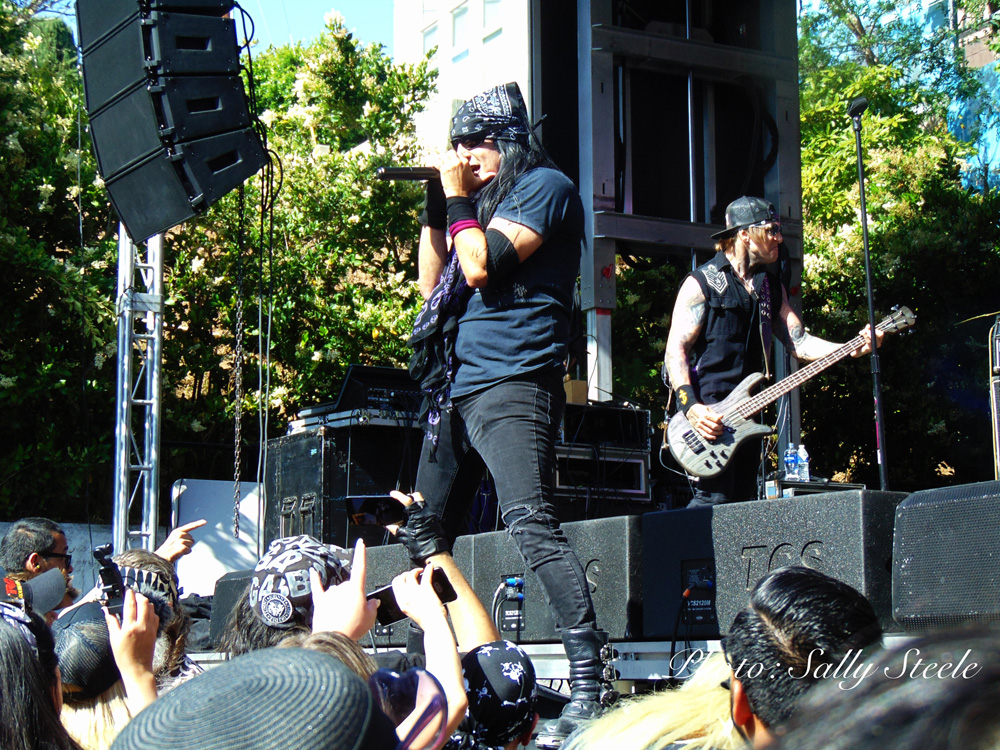 The adventure started when I headed to Los Angeles solo after a disappointing break up with my BFF…or thought she was LOL, I got to Malibu Saturday afternoon and headed to the beach for a short stint. I knew there was a birthday party going on for Dana Kennedy where I was staying at Karoline Saul’s house and when I got there at 8pm the party was still in full tilt. I recognized Keith St. John as soon as I walked in. I had a fabulous time eating junk food and playing ping pong as the night wore on with me and Keith singing Partridge Family songs at the top of our lungs in the kitchen with me dancing in my pajamas in my Josie and the Pussycats jacket. Hope we didn’t wake you Karoline! 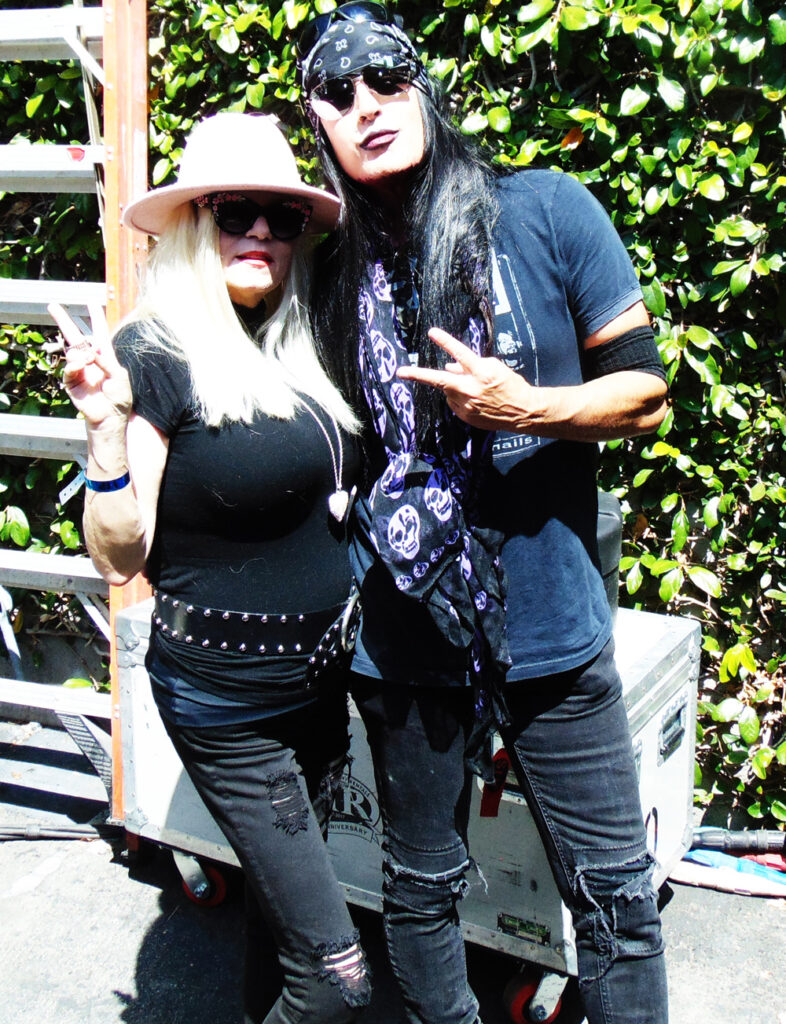 Prior to leaving Vegas, I had texted and spoke to Steve Summers of Pretty Boy Floyd, Eddie Trunk, Stephen Pearcy and Michael Starr of Steel Panther and alerted them I would be filming live at the event for Facebook and my new Patreon Page. (Patreon.com/sallysteelerocks). It took three days to get things up and running but I got it all going just in time. I also asked Steve, Michael and Stephen to get me an armband to stay backstage so I could film. 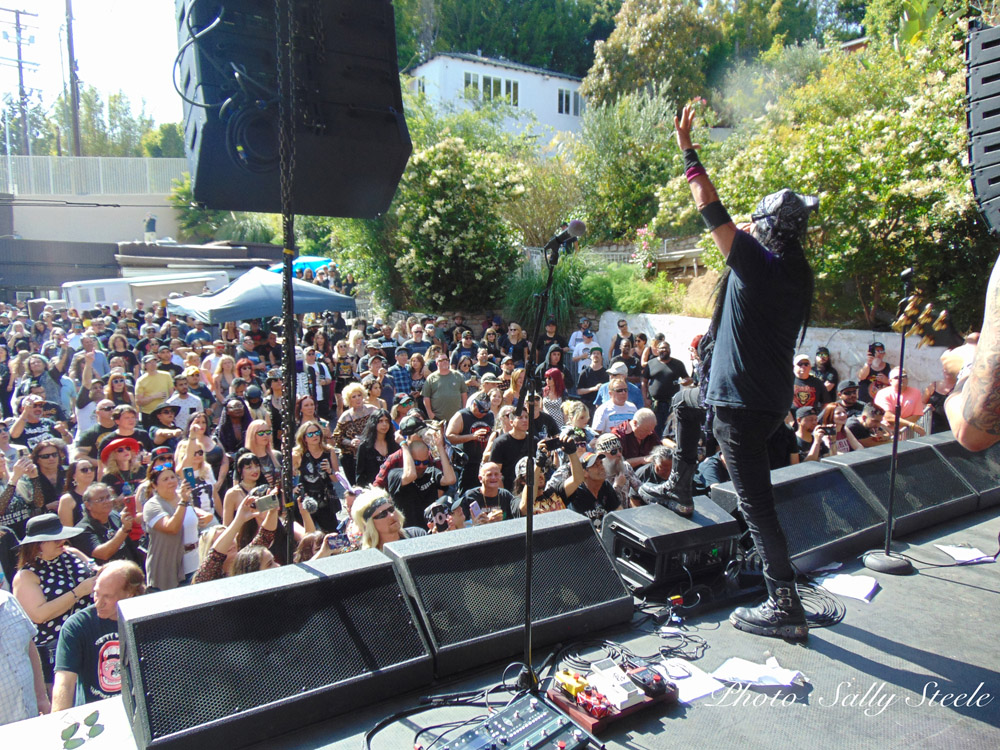 I went to Bob’s Big Boy in Burbank to grab a burger and got to Sunset Blvd at 1:30 in the afternoon to find a line all the way down the street to get into The Rainbow! I could only find one parking garage close by and it cost me $30. REALLY?!? I didn’t wait in line and just went to the front and told them I needed to get to the Pretty Boy Floyd meet and greet and I was already late. They let me in and said it was $22 charge for two drink for admission which I already knew about but when I looked for my money after the parking garage robbers cleaned me out I only had $17 cash on me. The girl was really nice and let me in for the $17 and I took off to look for Steve Summers. I spotted him just as he was entering the backstage tent and his tour manager said: “I got your armband Steve!” but Steve said he already had one and told him:”Give it to Sally.” Awesome! I didn’t have to worry for the rest of the night….. or did I?!?… 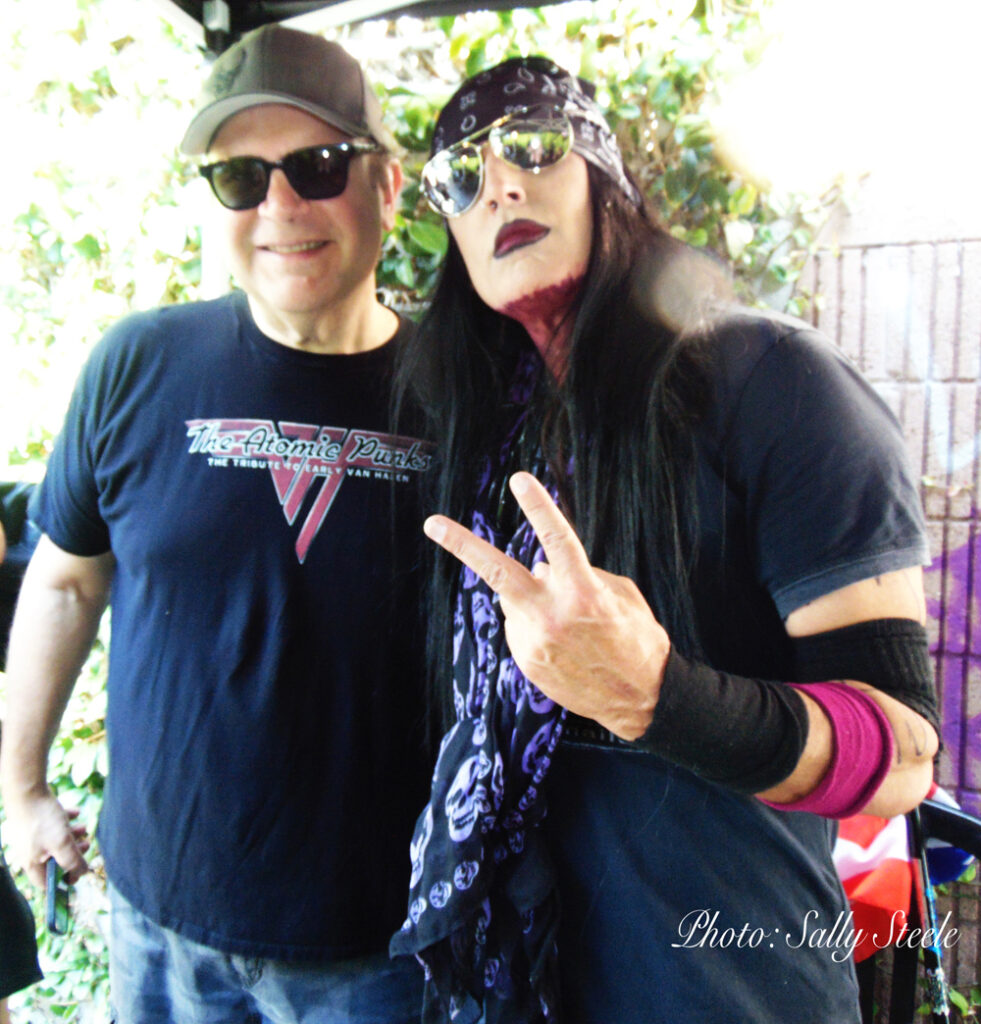 I had a fabulous time hanging with Steve, Ashes and PBF and Eddie Trunk and filming on and offstage and going live. It was almost like I was Steve’s personal assistant before his performance – which I didn’t mind at all. It was like: “Sally can you look for my readers in this bag?” “How does this scarf look?” “Can you watch this merch box?” “How do I look?” “How is my make- up?” But HEY! The band isn’t called PRETTY Boy Floyd for nothing! But when PBF was over the security guy (we will call him “muscles”) told me to take off my armband. “What do you mean?” I asked. He mumbled something and said he would throw me completely off the premises if I did not give it up. So I held up my wrist and he cut it off. I was livid. What a jerk. I didn’t see him cutting anyone else’s armband off. I went out in the crowd and signed a pick guard for Dave Bahls, 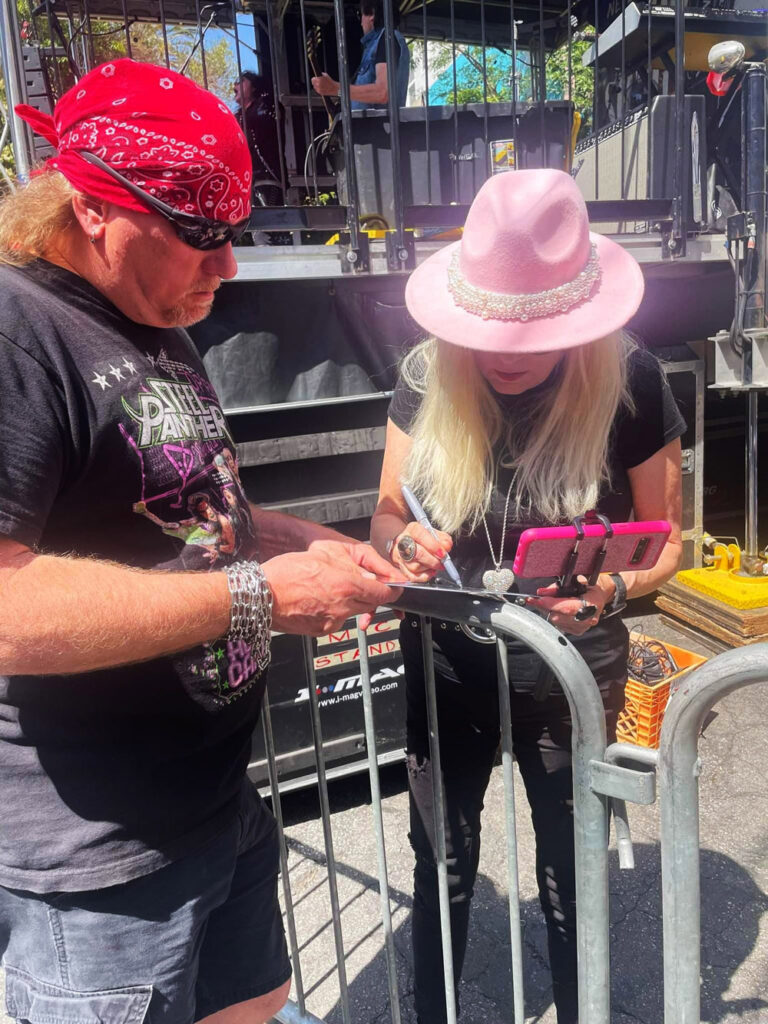 saw tons of friends – Al Bane, Gerry Gittleson, Carlos Cavaso, Krigger, Chas West, Rachel May and so many others as I tried desperately to get a Coke from the crowded bar. 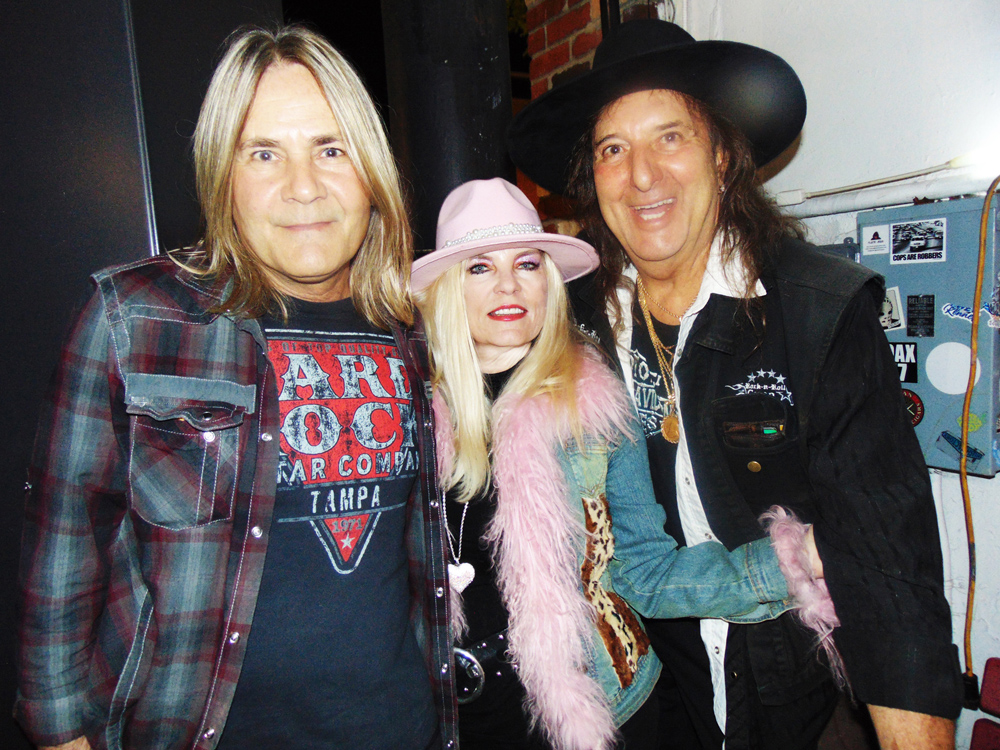 I was sitting down at the entrance on the bench hitting my phone trying to get the second live feed going on my Patreon page when I saw Jason Green standing over me and said: “Hi Sally”. It was good to see Jason and he told me he would help me get my youtube page going with Zoom interviews. Later on I was standing at the entrance to the Rainbow talking to Jason and Kip Winger came walking in! Kip was happy to see me and gave me a hug before he rushed off. 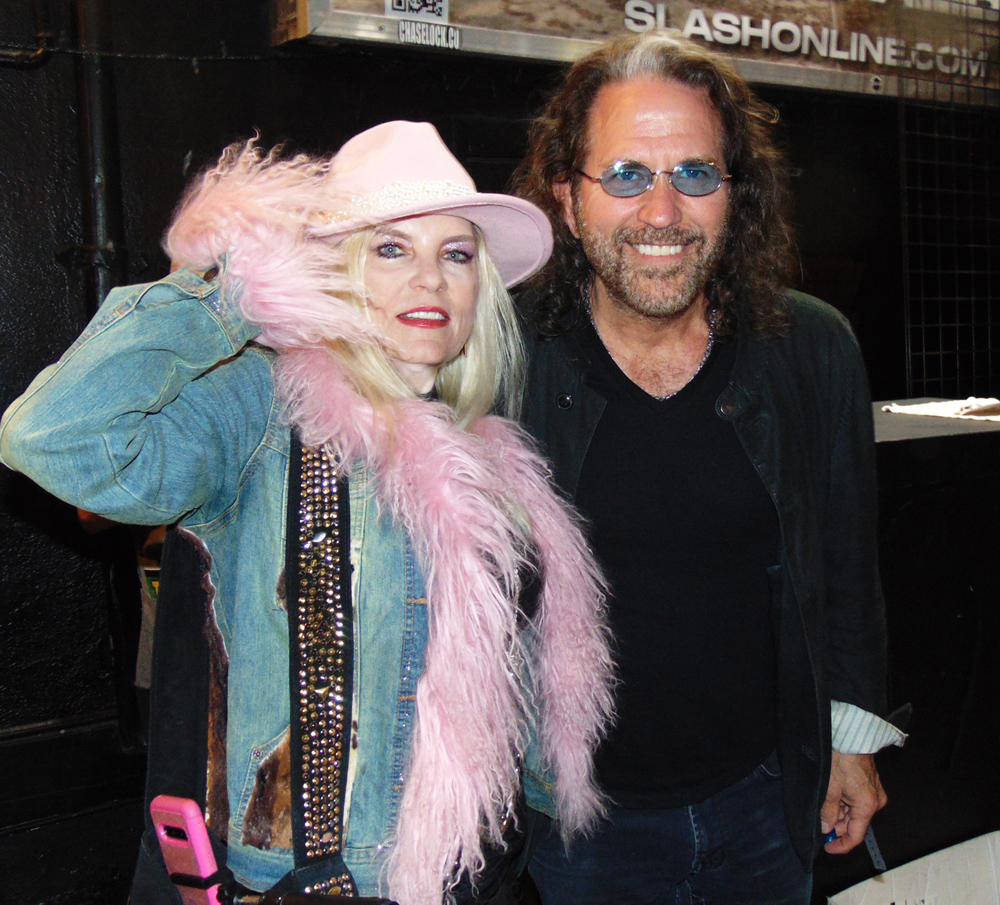 An interesting thing also happened as I was trying to push through the huge crowd. A girl who was being herded alongside me turned towards me and said: “Sally!” I turned and did not recognize her at first until she told me her name. “It’s Tracy!” It turned out I haven’t seen Tracy in more than 20 years since she left Vegas and moved to LA. She confided to me she just saw her ex-boss who she was hiding from him. When she told me where she worked I immediately turned to her and asked her to take me to him. This was a man I had been wanting to talk to regarding my film. She told me she didn’t want to see him but if she did see him she would call me. So I took matters into my own hands looking for a stranger I had never met in person before. I was able to get scattered images of him on Google and knew he had long black hair – but so did every other man in the crowd!  But persistence paid off and When I saw someone who might be him and I went up to him and asked if it was him which he said yes and introduced myself and gave him my schpeel and he said he would be in touch with me…stay tuned! 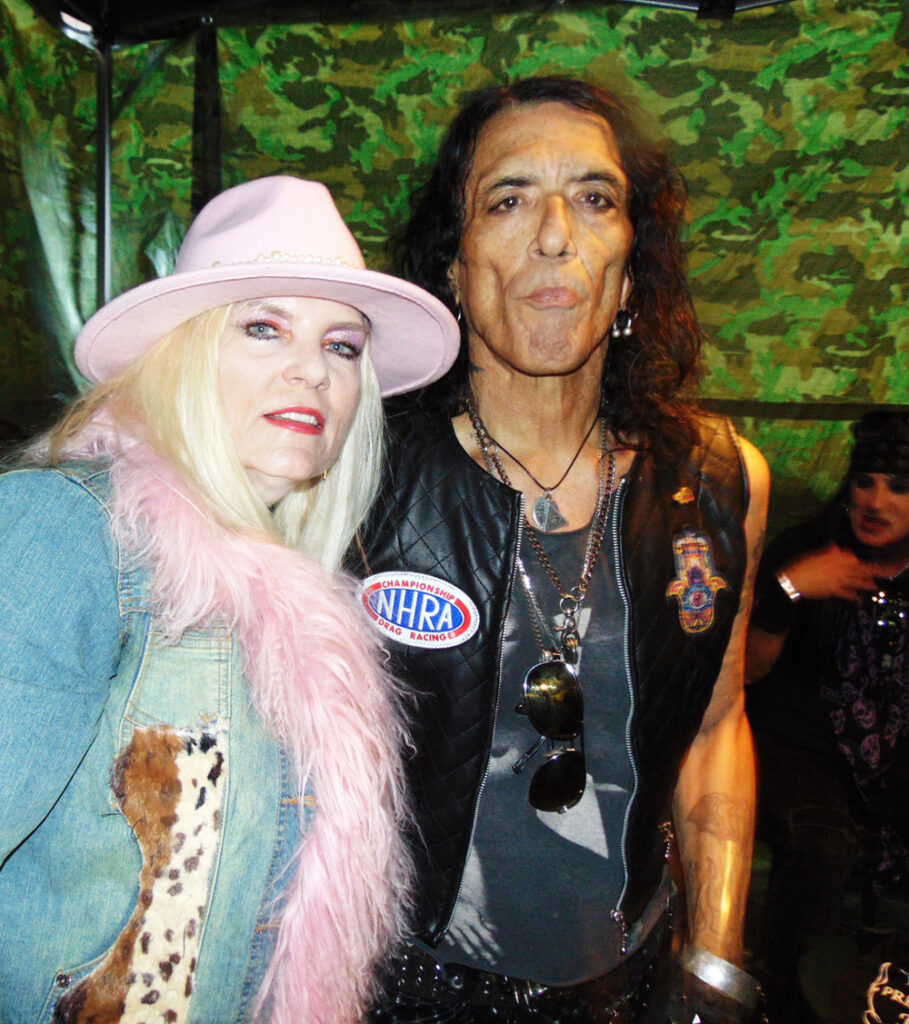 As I continued to push my way through the crowd I was stopped by a man who asked to take a photo with me. But I was in a hurry to reach backstage before Stephen Pearcy went on so I told him I would do it later and tried to hurry to reach Stephen. I was standing around for awhile and asked “Muscles” (very nicely I might add) why everyone else had my same armband and were able to come and go from the backstage area without it being cut off. Then Muscles threatened again to throw me out of the event if I kept bothering him. (Why can’t I be like Eddie Trunk?!? He didn’t even NEED an armband! LOL)  But lo and behold my hero Michael Starr /Mr. Steel Panther came to the rescue! 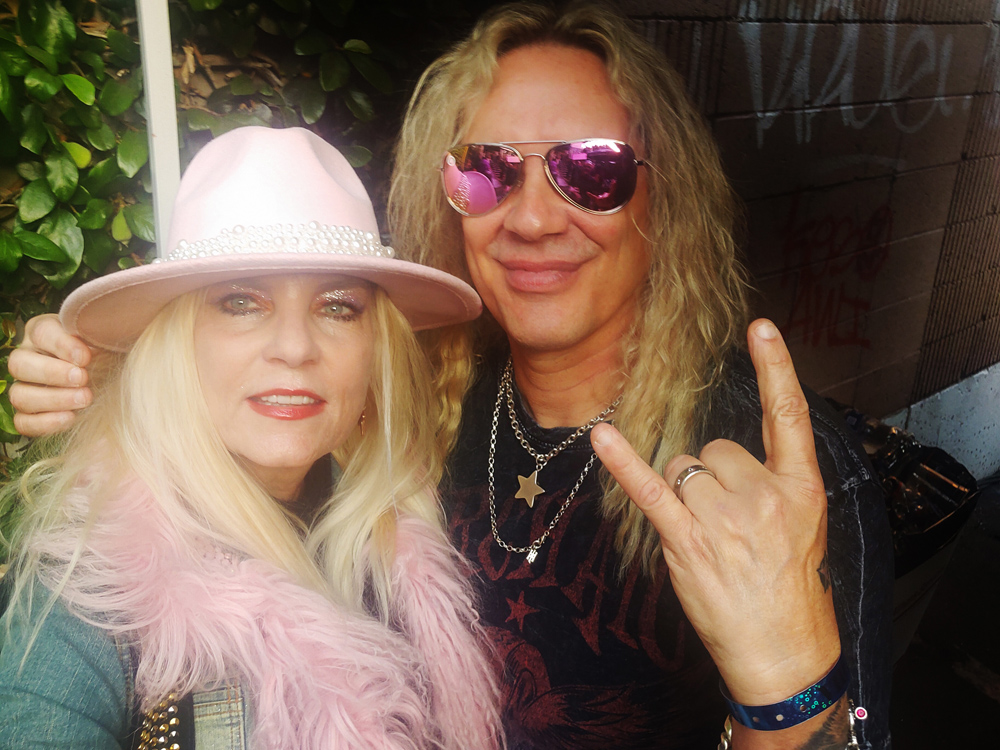 Michael had told me on the phone a week prior that if he saw me he would bring me back. So you can’t tell the star of the show what to do! So Michael led me back to the tent and let it be known to Muscles I was with him. Muscles stepped aside as Michael and I passed him and Michael whispered: “Watch out for that guy” referring to Muscles. So I hid myself in the corner and Jason Green who is now Stephen Pearcy’s tour manager took a photo of me and Stephen just before he went onstage. But it wasn’t long before I was in trouble again. The guy who had asked me for a photo out in the crowd managed to find a small opening in the corner of the tent and pushed his head through the opening and yelled: “Sally can I get a photo with you?” With that Muscles shined his flashlight in the man’s face and came running over yelling at him to go away and turned to me in anger and asked: ”What’s going on here?!?” “I don’t know! I don’t even know that guy!” I said trying to defend myself. Luckily Muscles walked back to his post without throwing me out. 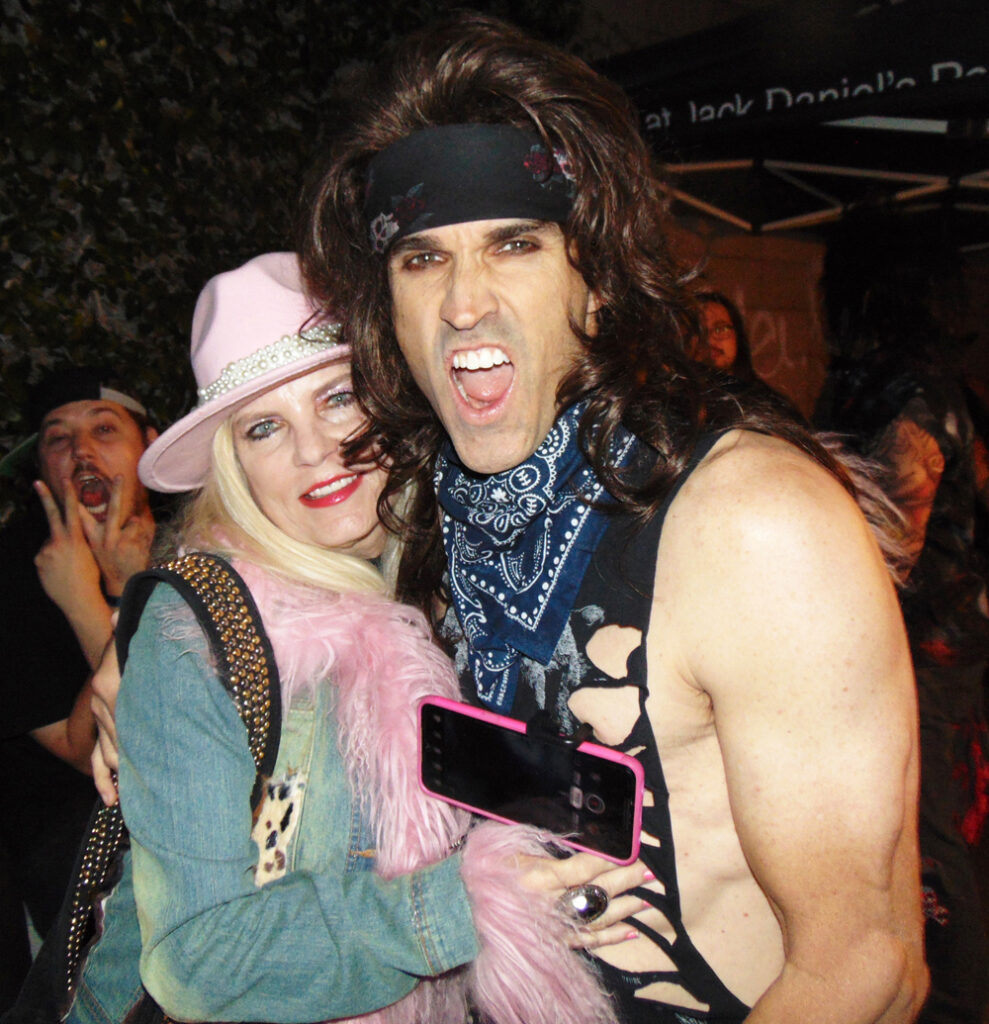 So with that the fun heated up backstage as my sweet Satchel from Steel Panther showed up and I continued to film and photograph the rest of the guys. Steel Panther was in top form as always with their musical talent, energy and never ending comedic performance intertwined in their songs. Some say they are degrading to women but I think these guys are amazing, intelligent, talented and completely hilarious. 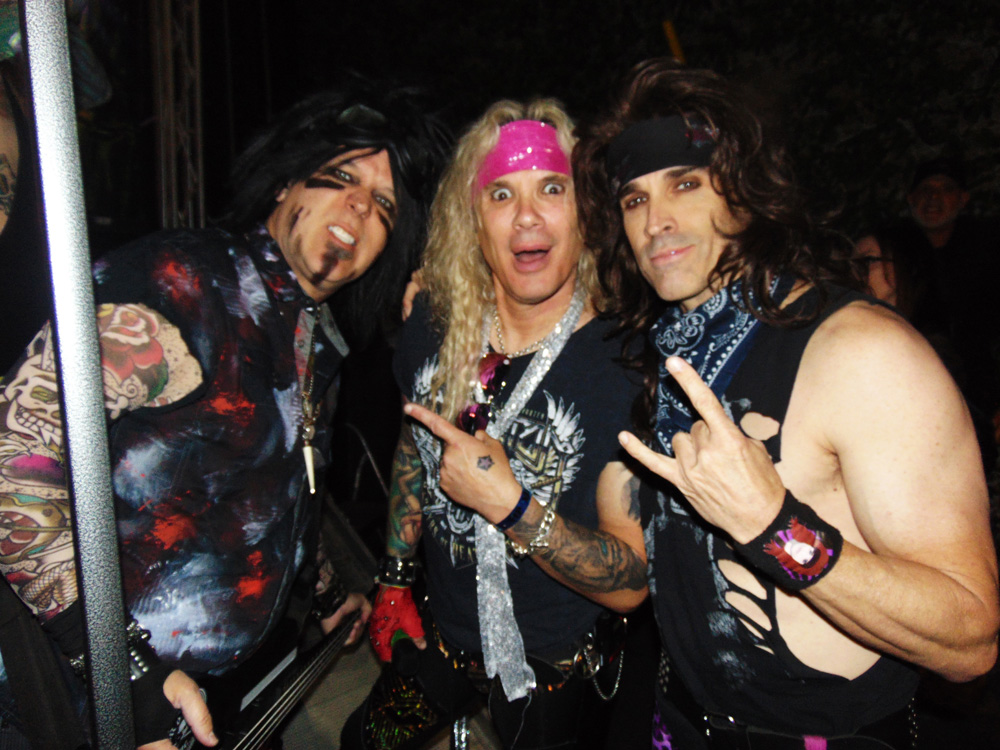 Marc Torien from the Bullet Boys made an appearance onstage with Steel Panther to add to the night’s festivities. 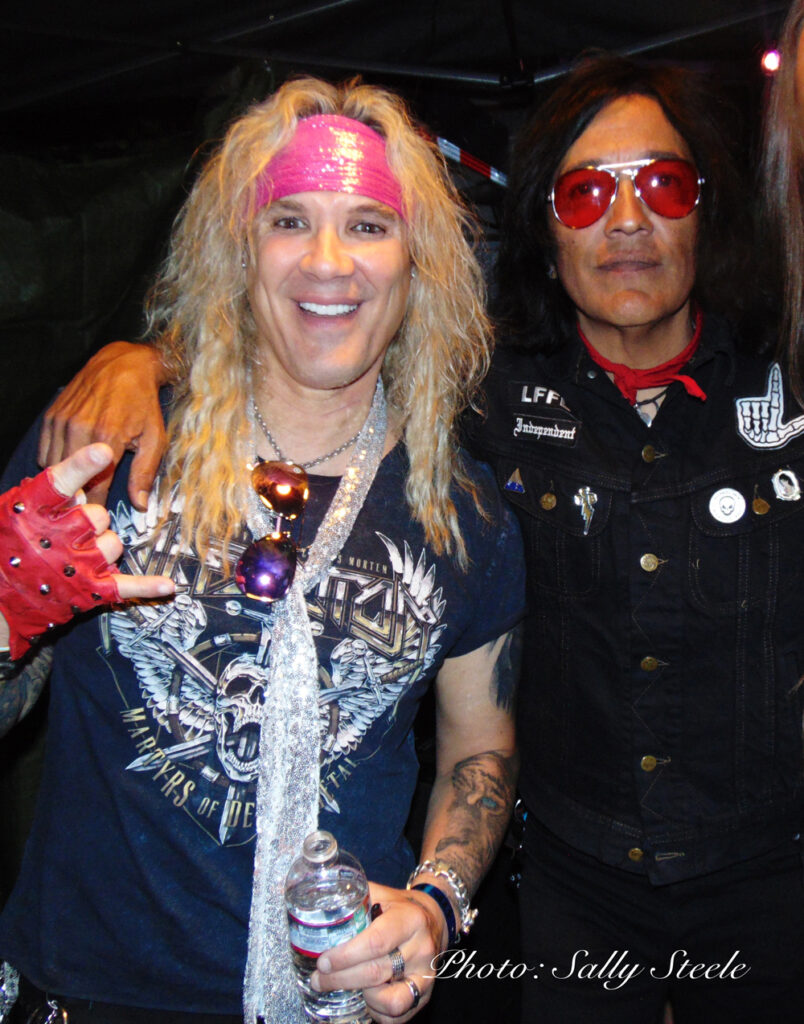 It was so much fun and despite being exhausted from the night before and the long day (10 hours to be exact) that I was so keyed up I couldn’t sleep. I kept going through the excitement of the day and all the people I had seen that day I don’t think I got to sleep until the sun came up. It was such a great trip and I was happy I got to see Rocky Burnette the next day as I drove up to Santa Clarita.

Sometimes I forget how many great people I have in my life with all the drama going on in Vegas, but this trip confirmed I really do know GREAT people who I am so happy are my friends!

Thank you Karoline Sauls for your amazing hospitality and letting me stay with you at your beautiful home! Thank you Steve Summers for making things happen for me while I was at the show and showing me such a great time! And thank you to Michael Starr for being my hero and rescuing me and showing Muscles who was boss! But what can I say? Adventure certainly does follow me wherever I go! 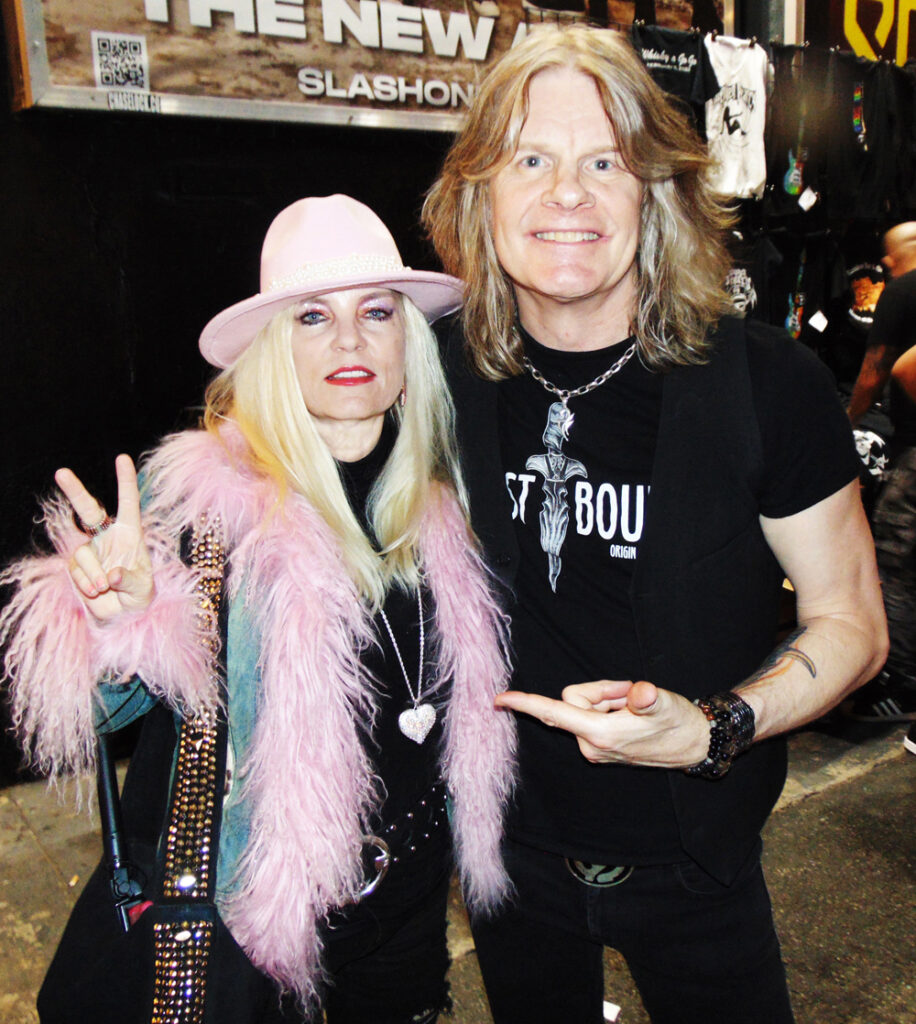 Be sure to join my Patreon/sallysteelerocks page where I will be putting up all the exclusive backstage footage on that page ONLY!

Congratulations to the Rainbow on their 50 year Anniversary!

See you next April! 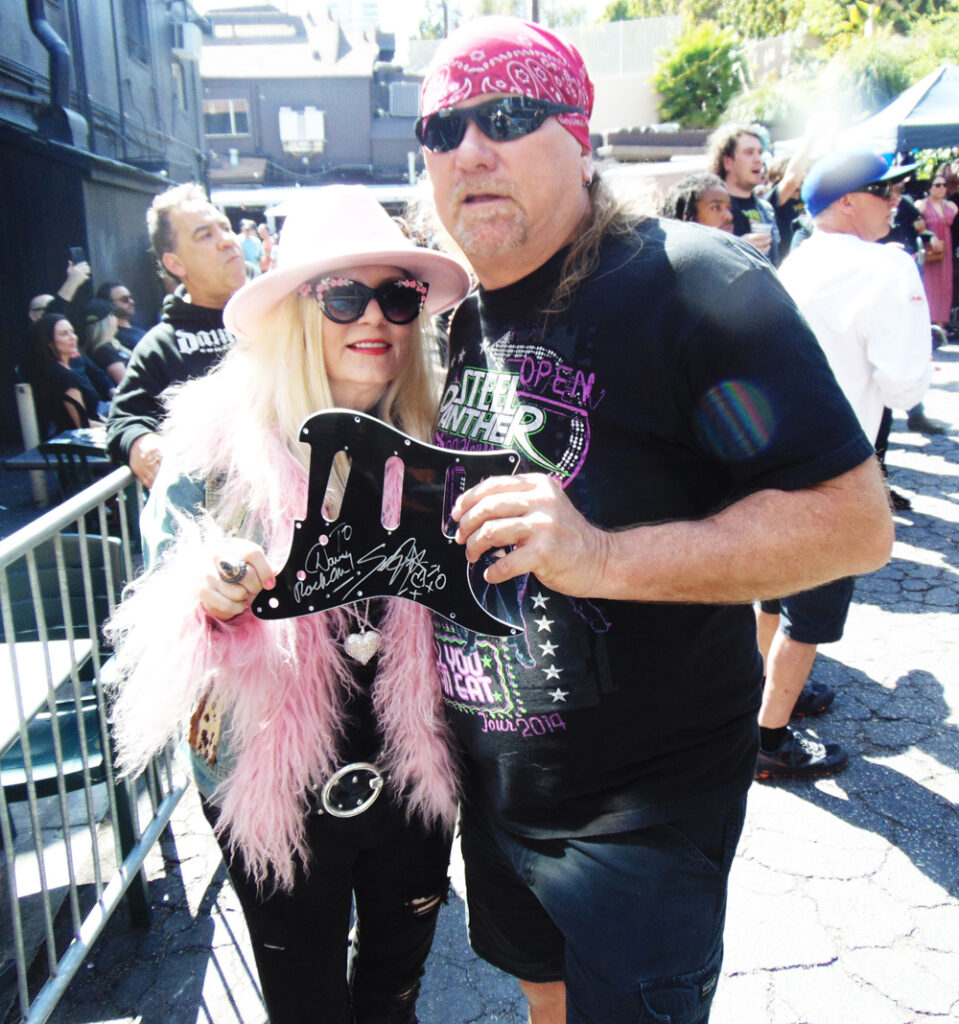 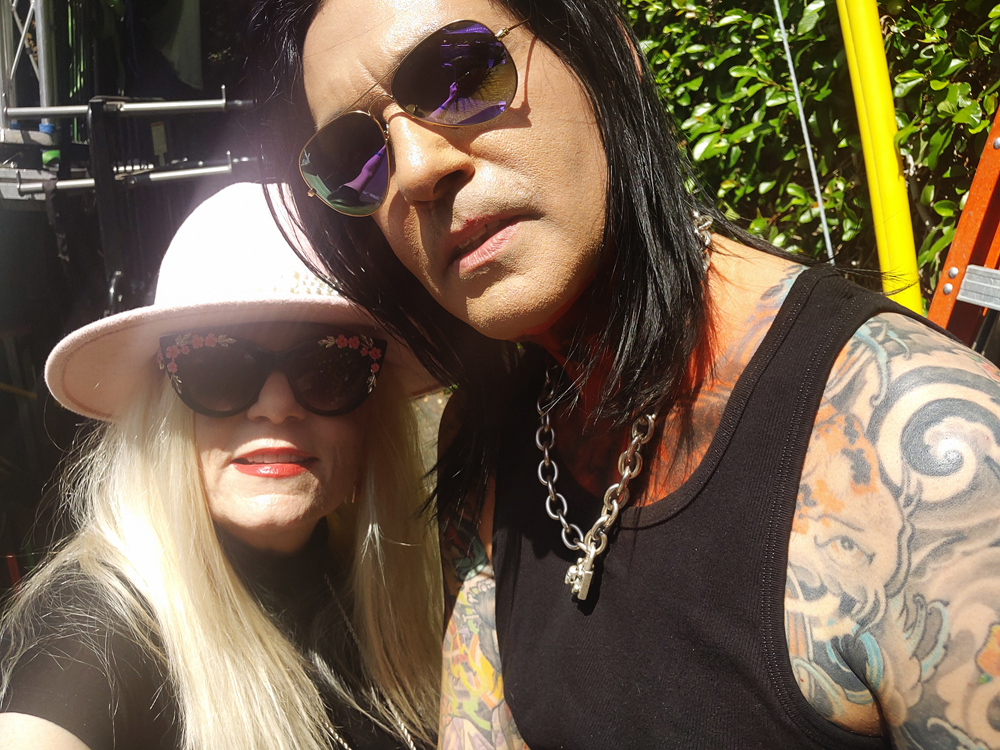 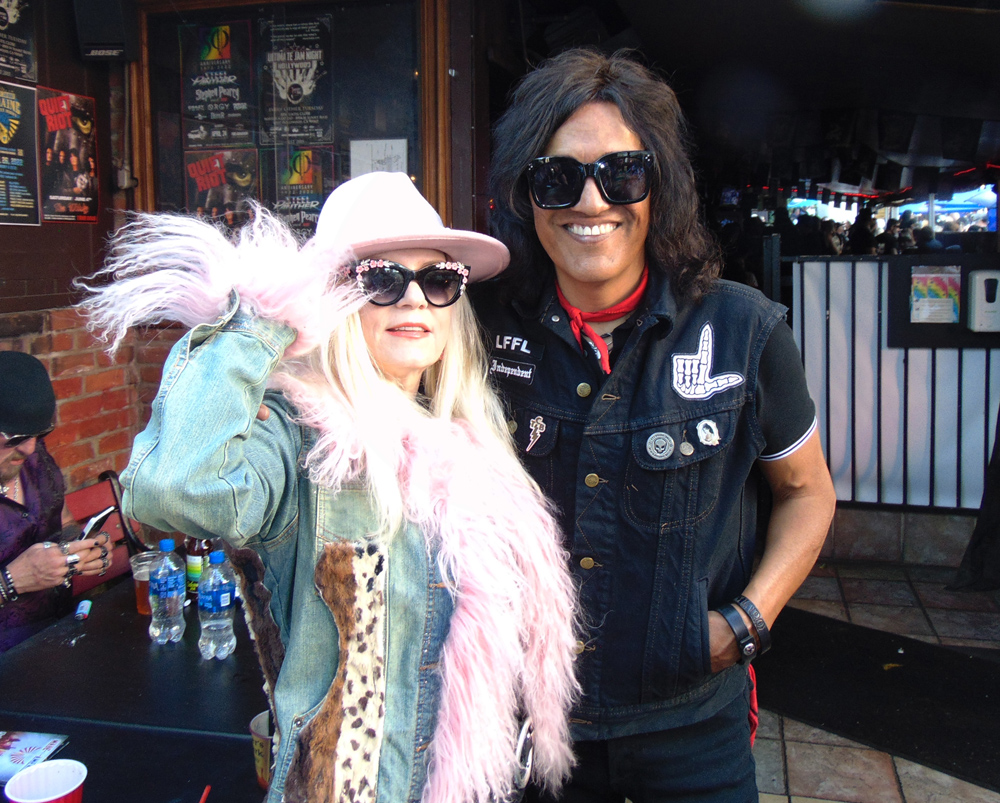 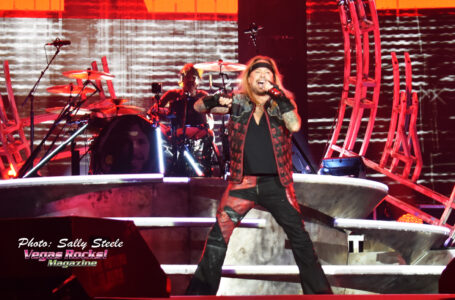 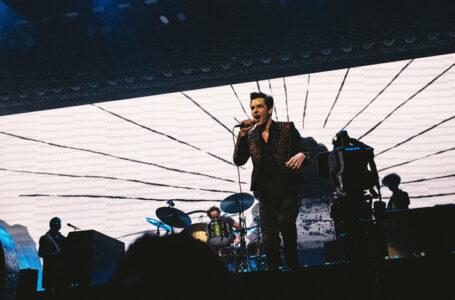