To promote MOTLEY CRUE’S residency at the Joint this month, I was really happy when I found out I was scheduled for an interview with Mick Mars. It seems after all these years, I have been hanging with Vince, speaking to Nikki here and there, playing cat and mouse with Tommy, but I never had the opportunity for a one-on-one interview with the man behind the guitar of my favorite rock band for the past 30 years. The interview was supposed to be 15 minutes but I think it ended up being close to 40 as Mick opened up about many subjects. And I guess Mick was a little too comfortable speaking with me because after the interview I got a call from management saying that I could not include much of what we spoke about. Nevertheless, Mick talked about his achievements, past and future and also solved a 28 year-old riddle of mine if we were at one time sleeping in the same bed ….! Ok read on and you will understand! 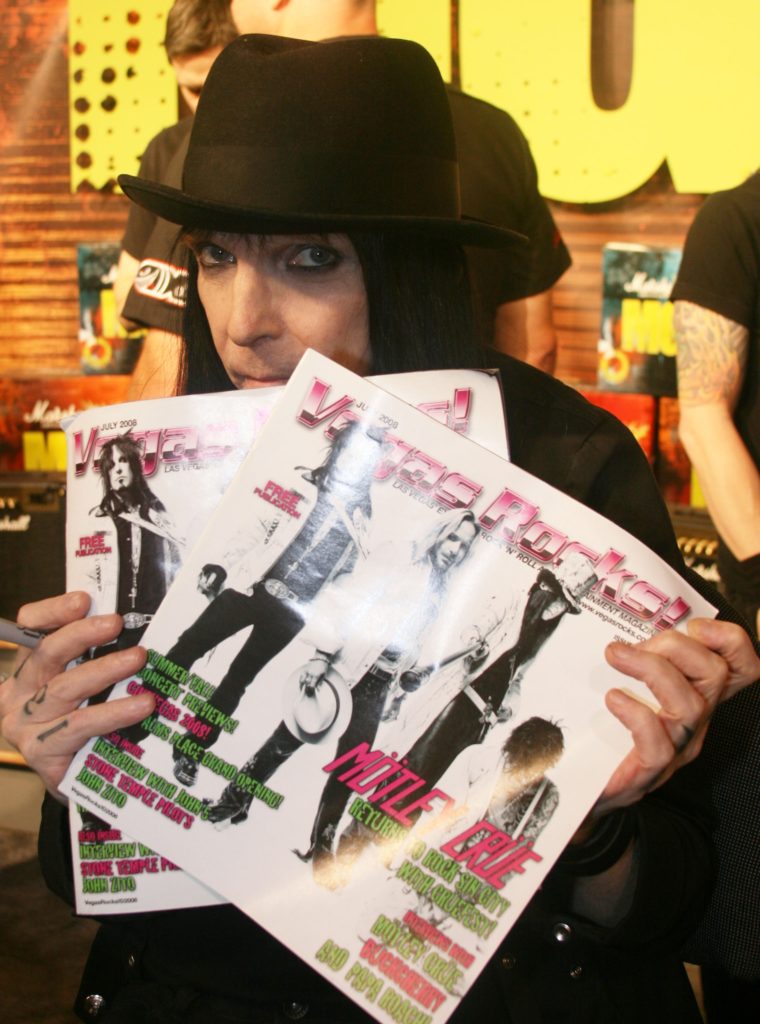 VR: “Hi Mick, how are you feeling today?”

VR: “We are so excited about you guys coming to Vegas; do you have anything special planned for the fans as far as meet-and-greets or anything?”

Mick: “Yes, we will be doing meet-and-greets and will be at the Joint for three weeks and I feel like we will even be able to take our show to another level as far as production-wise because we can sit down and experiment instead of being locked into one thing. It gives us a chance to not only develop the show but we can decide to put this in or take this out to make it different for some drunk people who might fall through the door and say: “Hey what’s this?” [laughs].

VR: “And there will definitely be some of those! [we laugh]. If you would have chosen a different career path in life what would it have been?”

Mick: “I would probably make guitars.”

VR: “Well, you should be doing that now!”

Mick: “Well, I don’t have the equipment to do it. Those things are expensive, man! [laughs]”

VR: “It is well documented the band has been through everything – drinking, drugs, abuse; if you were 18 again and you had it to do over again would you do anything differently?”

Mick: “No. And I know a lot of people would say that, but I can’t think of anything  that would have made me who and what I am today had I did done things differently. And I know that sounds cornball and a typical answer, but it’s true. I might have been a conservative old man instead of a crazy old man [laughs].” 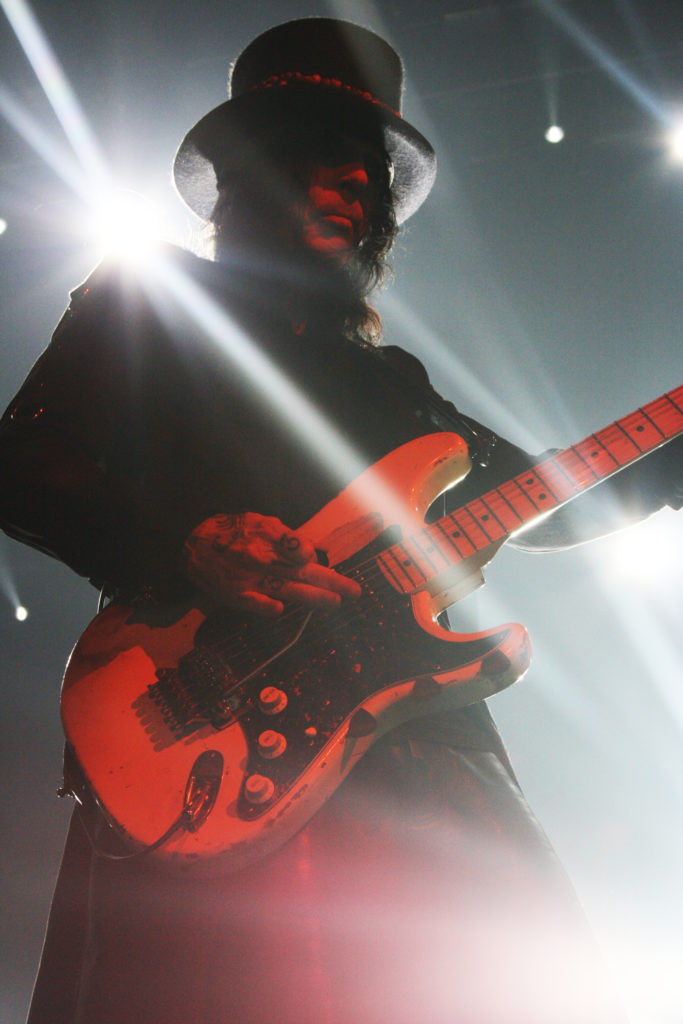 VR: “There were rumors that Vince is leaving the band after this tour. Is there any truth to that?”

Mick: “I would have to say… noooo! [laughs]. Sometimes Vince says something that just comes out. And when he reads this, he will probably get mad at me, but relax Vince – it’s all good! I mean sometimes I say things like: ‘Screw you guys, I’m going to leave’ but you got to think about where you’re going. I mean if Mick Mars was to go out by himself – by myself, how many people do you think I would sell tickets to? Three? [laughs] So with MOTLEY that’s just me, that’s not what made the four of us. Just like the BEATLES, I mean if they got back together and somebody took John’s place it just wouldn’t work. And it’s the same with us. We can do things on our own like Keith and Mick from the STONES or like Paul went off on his own but we always know that MOTLEY CRUE is our staple. It’s our gig and who we are. So as far as Vince saying that, he was just probably in one of those moods [laughs].”

VR: “I understand those moods! I see him here a lot in Vegas and sometimes he gets tired of me taking his photos so many times, but he always gives in, and he is so cool and I love him to death.”

VR: “He looks great! He just came to our Vegas Rocks! Magazine Awards at the Hilton and we presented him with the “Lifetime Achievement In Rock n’ Roll” Award. I am really proud of him.”

VR: “I hear a lot of things like you guys don’t get along anymore. But who in the band would you say you are the closest to and get along the best with?”

Mick: “That’s kind of a hard question. Probably Nikki and I get along the best but I also really get along with Tommy really well. Vince has kind of distanced himself. I mean he has LSD – Lead Singer Disease- [laughs] so he’s distanced himself, if you know what I mean, not from the band so much and he does his job and everything he’s supposed to do. So it’s kind of like; would you go and hang out with your brother? No, I’d rather go home and be with my family.” 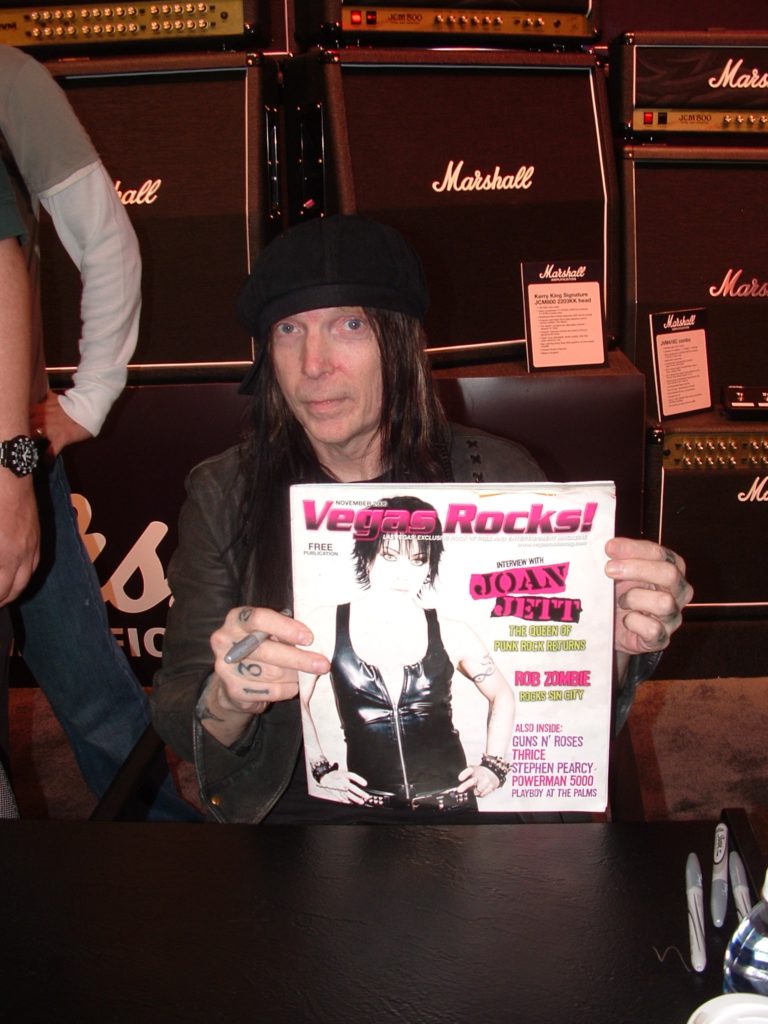 VR: “Well, it seems like it’s always been that way with Vince. I mean after the accident in the early 80’s   there was a lot of friction between him and the rest of the band. Then he was out then he was back.”

Mick: “Yes, that’s true. In the 80’s we would all hang out a lot more than we do now but we were a lot more naive back then.”

VR: “You mean you don’t feel like you missed out when they all lived in the apartment together on Clark Street that was condemned by the Board of Health?”

Mick “[laughs] Nope! Not even close [laughs] I just sat back and chuckled at it.”

VR: “When you first met all the guys, did you have a feeling immediately like you would make it big?”

Mick: “When I first met Nikki, I said yeah, this is a good set, when I heard Tommy I thought yeah, this is great. But when the first singer came in, I had doubts. And I pulled Tommy and Nikki aside and said I don’t like this guy. And Tommy said; ‘Mick doesn’t like this guy’ and I said ‘no, I like this other kid that I just saw down at the Starwood’, which was Vince. I said; ‘I don’t care if he can sing, look at the charisma and the women he brings to him. Sex sells and he’s the man to do it. So he came out and he sang very well and we just blew up.”

VR: “Well, he was friends with Tommy before that, right?”

Mick: “He was friends with Tommy, I think they went to school together, but I don’t know if they got along or really hung out, but they are  now -for at least for two hours a night! [Laughs].”

VR: “We are also hoping to honor you at the Vegas Rocks Magazine Awards this year. I think you are one of the greatest, most ultimate, and even a little bit underrated guitarists in the world and I would love to see you get the credit you deserve. I’m sure you hear this stuff all the time.”

Mick: “Well, yeah but not that radical [laughs]. Thank you, that means a lot to me. I always see in these magazines, hey vote for your top favorite guitarists and I don’t vote for myself  and they have this guy and this guy that won and guess what? I’m not even on the list!”

VR: “That really sucks, well; I’m going to fix that! I’m the Publisher of this magazine, and I can do what I want so I am going to set up our own list of “Top Rock Guitarist’s of All time” and I am going to put you in the top five!”

Mick: “Thank you! That’s really cool of you.”

VR: “I think you kind of answered this but I wanted to ask, do you have any regrets?”

VR: “What are you most proud of in your career?”

Mick: “Well, let me see… oh, I know, I’ve got probably if not THE best, the second best guitar tone on the planet.  I’m very proud of that. You should see some of these bands when we play with them, like when we were touring with AEROSMITH, they say they have never heard a tone like that in their lives. I’ve worked on that tone for years and years and years. When I first heard Jeff Beck play, and the tones that he was getting – and the same with Hendrix. Even if you weren’t an out of the ordinary player, but  Jimi Hendrix played from his heart, and the tones that were coming from him were really inspirational to me. And that’s when  I realized that tone matters a lot.  So that’s when I decided I would create and develop a really great tone where people would notice. And this is the honest to God’s truth; AEROSMITH guys bowed to my amp when we were on the “Route of All Evil” tour.”

Mick: “Oh, yeah. I also came up and jammed with them on some blues numbers. It was a lot of fun. We just watched everyone’s mouth drop open.”

VR: Wow. I think we’ve mostly covered everything. But I have kind of a crazy question for you; back in 1984, I was married and lived in North Hollywood. One day I came in the living room and there were these young boys about 14 anxiously waiting to see our guest room. My ex-husband was getting ready to show them the room you supposedly slept in at one time. Do you ever recall living in North Hollywood?”

Mick: “Yes, as a matter of fact I do. Off Whitsett… I remember a liquor store was close by… Magnolia, it was off Magnolia.”

Mick: “Yes, I know exactly the spot. And check this out: I used to repair motorcycles nearby and Roy Rogers used to sweep the sidewalks there when he was fourteen at the post office there, so Roy Rogers and I have something in common [laughs]. Walt Disney used to live down the street there too, when he invented Mickey Mouse.”

VR: “When I would fight with my husband I would go into that room and sleep and I was so comfortable. They said that was your bed in that room, too. Do you remember taking your bed with you when you left?”

VR:  So that WAS your bed! It was a twin bed. it was the most comfortable bed I have ever known. I took it with me when I left.”

Mick: “Yes, that’s right. I guess so. I painted the room orange because it was the cheapest color.”

VR: “So now I know my ex-husband wasn’t lying to me all these years! Thanks for solving that. I look forward to seeing you guys when you take over the Joint in February! Thank you so much for your time today Mick and it was great talking to you.”

Mick: “It was great talking to you, too. Thank you!”

DON’T MISS MOTLEY CRUE WHEN THEY TAKE OVER THE JOINT AT THE HARD ROCK FOR THREE WEEKS IN FEBRUARY!