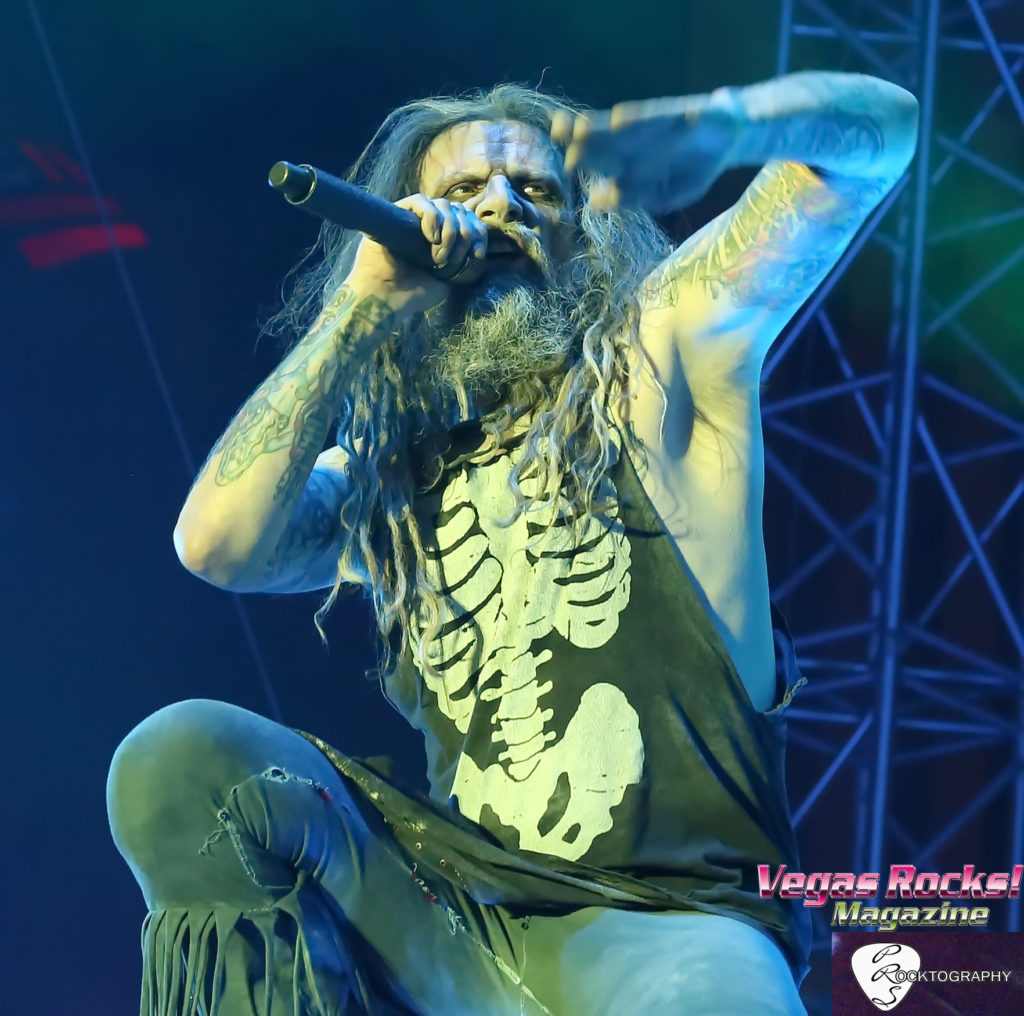 It’s METAL TIME! Las Rageous once again took over down town Las Vegas with a vengeance!

I was not able to attend the last event but this year I was not going to miss all the excitement no matter what! So with my movie screening in downtown Los Angeles October 18th at noon, I hit the 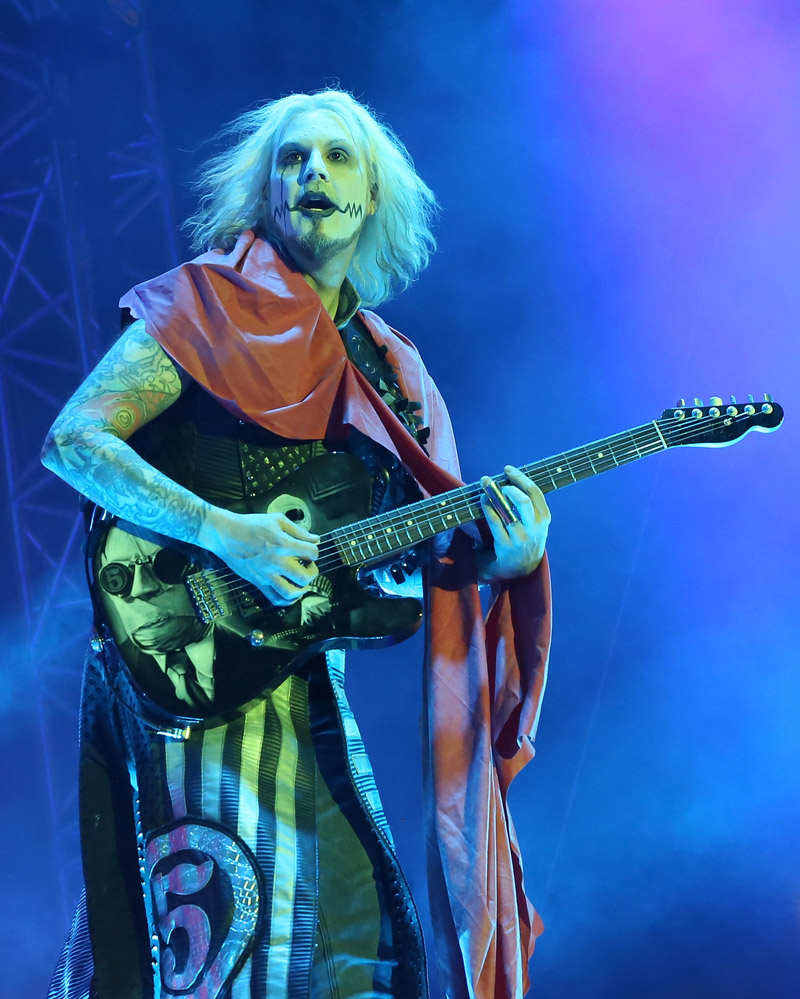 road immediately afterwards and headed back to Las Vegas.  I also had plans the first night of Las Rageous to catch my favorite entertainer of all times, the incredible Tommy James and the Shondells. Quite a stretch if you can believe that LOL. Tommy James was at the Golden Nugget just across the street from the Downtown Events Center where metal was in full swing featuring The Used, Sleeping With Sirens, Bring Me The Horizon, Dance Gavin Dance, Poppy, Fever 333, He Is Legend and so many more! So my plan was to run across the street to catch all the excitement.  But unfortunately 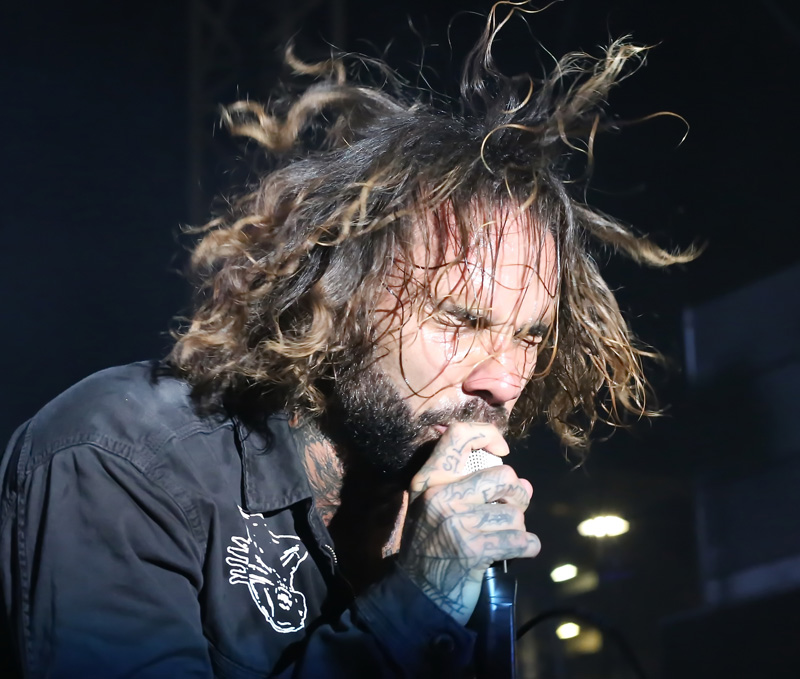 I got sidetracked making out with my date after I dropped him off at his car and things never transpired for me and the first night of Las Rageous.But on Saturday I was there bright and early when the gates opened for a full day and night of Las Rageous Metal. As soon as I walked around the corner, I was greeted by two guys: “Hi Sally!”, they said. I asked if I knew them and they said they had been to a couple of my awards shows and were fans of my magazine. So I shook hands with them and went to get my credentials to get started for a full day and night of interviews, filming and chaos. I ran into so many people I hadn’t seen in years including Chris Babbitt of Taking Dawn, members of Mynas and many others. Taking Dawn hit the stage with an amazing stage dive by Chris Babbitt and Mynas was burning up the other stage with full on metal. I interviewed talented (and hot!) frontman of Atreyu Alex Varkatzas backstage and then headed over to s 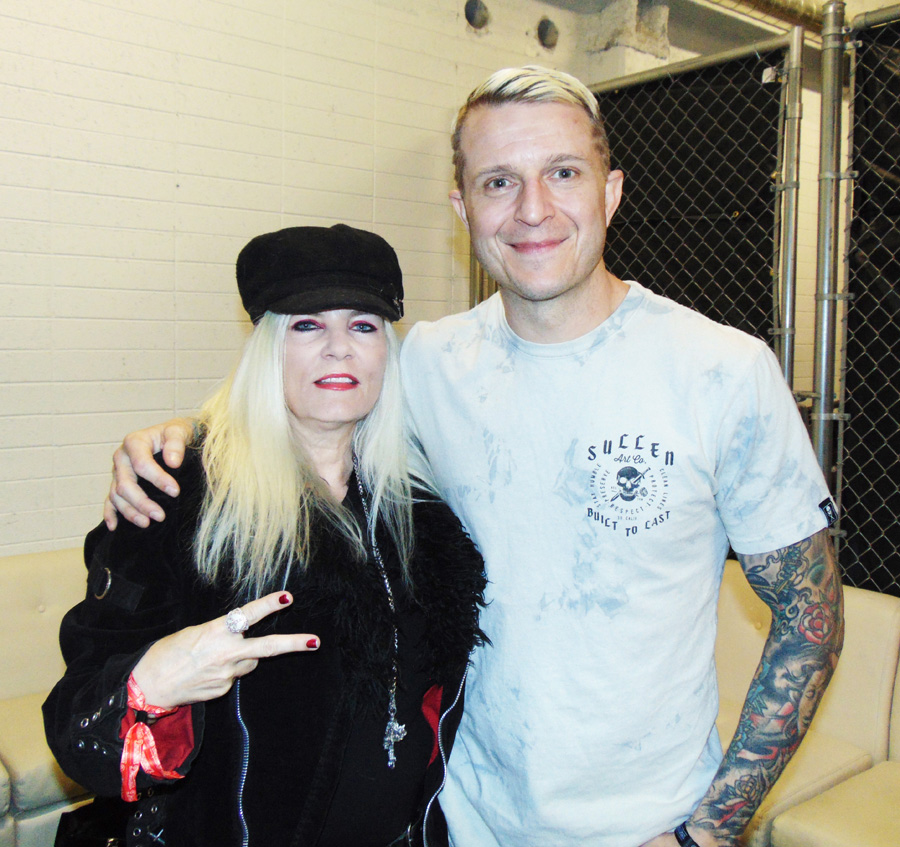 ee The Hu and  Whitechapel, I Prevail, and Beartooth in action. You can check out the interview I did with Atreyu’s Alex Varkatzas here: https://youtu.be/JAu_4qbg4

Talking to people in the crowd though, it was clear everyone was there to see Rob Zombie. People had flown in, drove in and got there anyway they could to witness Master Zombie in action. When Chevelle took the stage I decided I wanted to be a part of the crowd to witness Rob Zombie madness so I stepped over bodies and crowds huddled up to the stage to get as close as possible.  I sat down with some girls near a guy who made a pillow out of a water bottle to 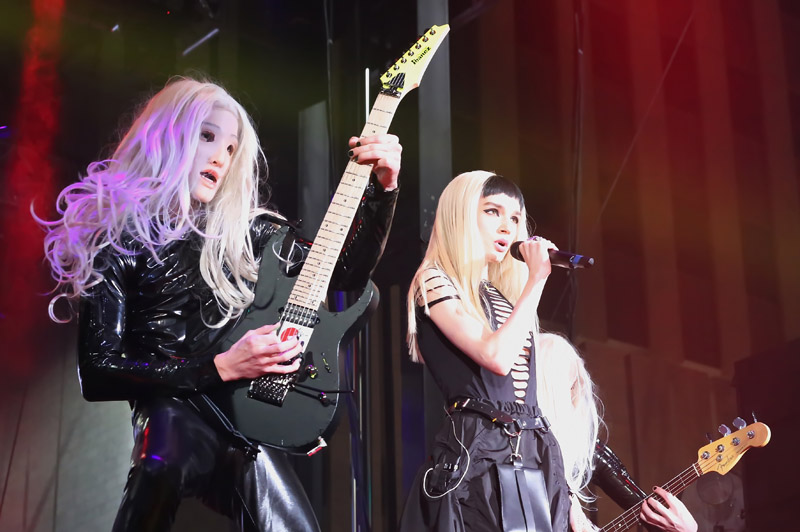 stake out my spot. But when the guy who was lying down got up, he fell on top of me. I was warned by those near him I was sitting in the mosh 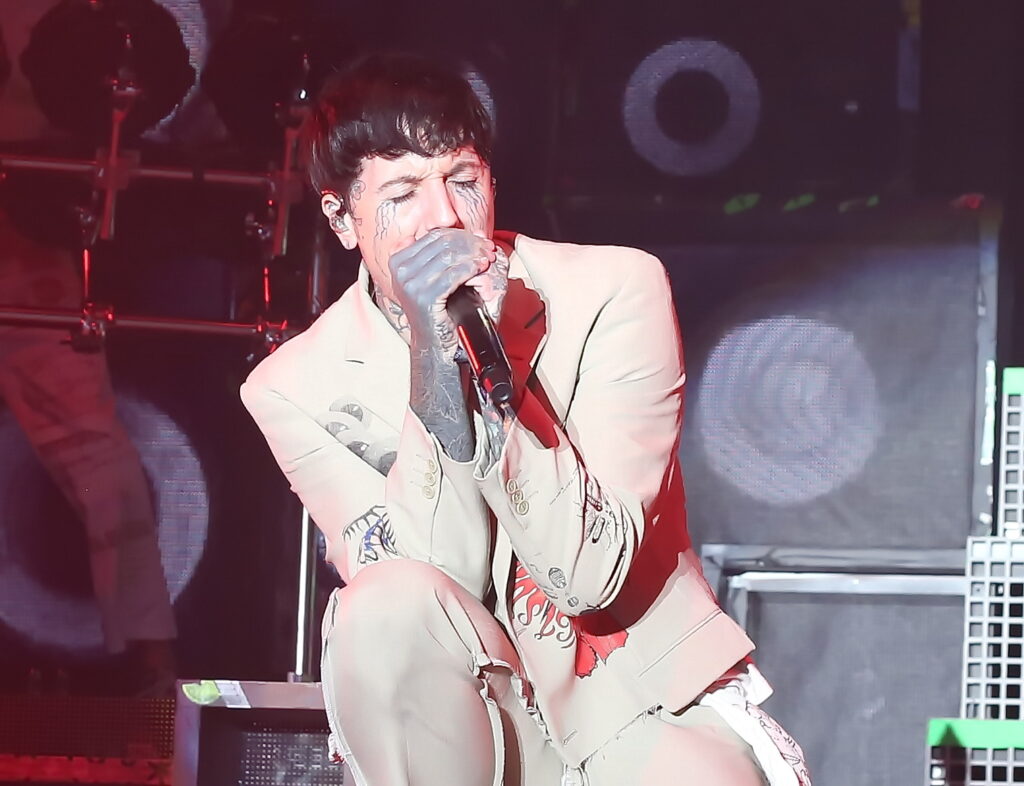 pit and I was wondering if my medical insurance would cover my injuries… oh wait! I don’t HAVE any medical insurance! I better move! Besides I didn’t want these crazy people bleeding allover my new leopard boots LOL. I also had all my camera and filming equipment in my bag so I headed up closer to the stage. My plan was if I could just get up to the railing, I could put my bags over into the photo pit area. By some miracle I actually got a spot right where I wanted to be on John 5’s side of the stage. I was ready for full face frontal Zombie madness! “Thunder Kiss ‘65” and “Living Dead Girl” rang out and I couldn’t have been more excited. I was jumping up and down with the crowd in full metal ecstasy. John 5 was so amazing as always with his different versions Fender Telecasters all different themes like “Creature of the Black Lagoon” and many others. John is a good friend of mine and I was so proud 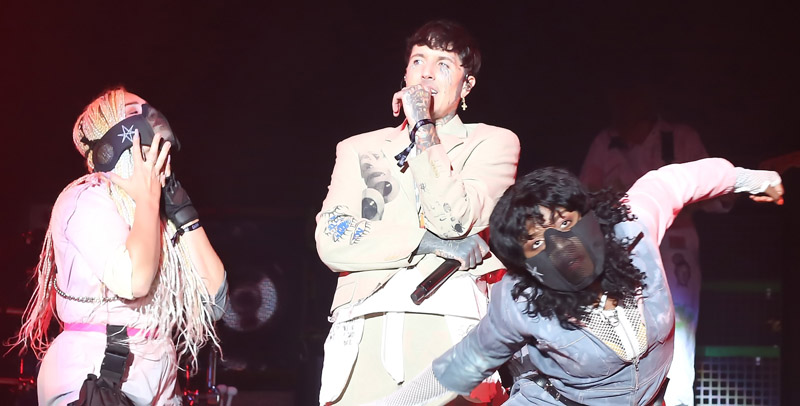 of him and his performance. Rob Zombie’s show is like no other. He is an entity unto himself. He is all about monsters, movie madness, horror and metal music into one amazing show. Like a wild animal unleashed, with his wild movements, the screen is lit up behind with Herman Munster, the Adams Family, as creatures and characters make their way up to the stage to join him. Rob flings his dreadlocks around like a madman and he is the ring leader of madness as he commands the stage like no one else can. John 5 and Piggy D. are the “Silent” monsters which works out well because Rob does all the talking and has A LOT to say!

At one point Rob stopped the song and told everyone to put down their phones filming crappy footage of the next song that they will never watch after they film it. Rob pointed out a girl filming him saying to stop filming him saying that. I have been a huge fan of Rob Zombie ever since my ears heard “Dragula” in 1998. I have had the pleasure of meeting and interviewing Rob several times and I appreciate his amazing, unique talent. Not to mention he is a cool guy. Rob told me once his first show in Las Vegas was somewhere out in the middle of the desert in a drainage ditch in the dark. You sure have come a long way Mr. Zombie! 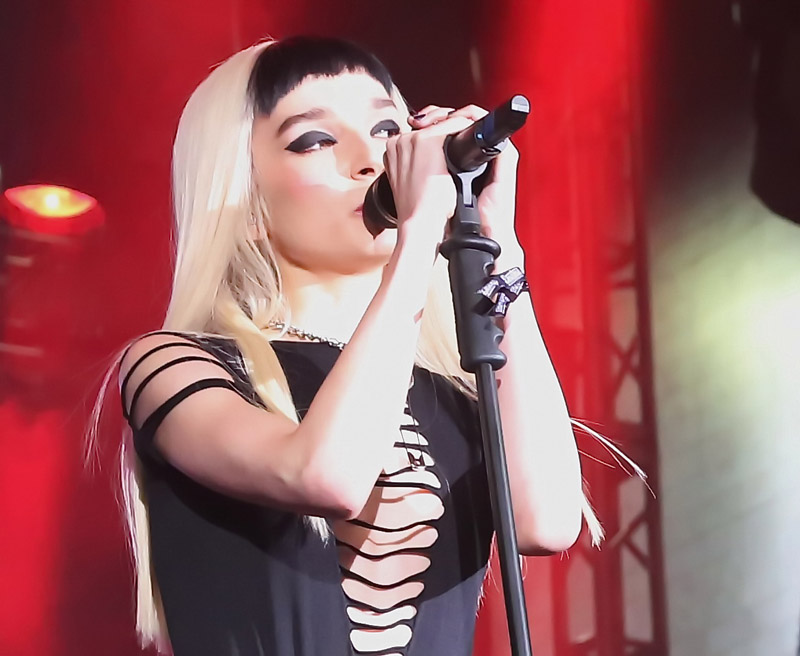 As I was leaping around in excitement to Rob Zombie songs it occurred to me the night before; I was enjoying a trip back to the sixties sitting in a comfortable chair holding my date’s hand singing with the Angels to “Sweet Cherry Wine” with Tommy James. And now here I was the next night dancing with sinner’s headbanging to metal madness in front of a mosh pit with Rob Zombie! You can’t get more of an extreme stretch in taste of music like that! I never said I was normal! LOL.

I was hoping so much Rob would play “Dragula” and my wish came true. I was so happy! With all the power of the devil unleashed Rob delivered what the crowd came to hear and satisfied everyone’s appetite. No wonder Rob is such a great filmmaker. His shows reflect genius creativity. And if you have never seen Rob Zombie live you are missing out! So thank you Las Rageous for bringing us another amazing festival to us metal fans!

See you next year!

Special thanks to Ashley Di Buduo and Kelly Frey fron A 12 Entertainment for credentialing us for this great event!